Rabat - ONSSA has responded to two cases of discolored meat in Kenitra, which sparked rumors of meat unfit for human consumption. 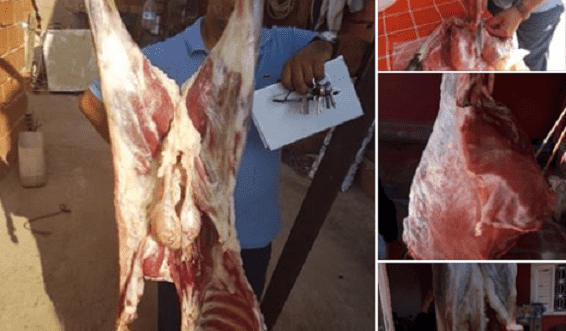 Rabat – ONSSA has responded to two cases of discolored meat in Kenitra, which sparked rumors of meat unfit for human consumption.

Pictures of the discolored meat made their way to social media. The pictures showed sheep meat of odd colors: green, blue, and gray.

In response, Morocco’s National Office for Food Safety (ONSSA) published a statement on Facebook to explain the two cases.

ONSSA wrote that the two cases were reported in Kenitra, a city near Rabat. The agency added that when the photos were posted on social media, officials from ONSSA travelled to Kenitra to investigate the incidents.

According to ONSSA, the officials reassured worried citizens, emphasizing that the discolored meat in the first case was caused by pockets of water in the lungs of the sheep. The officials added that the sheep’s meat was safe to be consumed.

For the second case, ONSSA said that the sheep had swallowed a “strange subject,” resulting in inflammation of its tissues. ONSSA added that “the infected parts have been removed” but that the remaining meat could be consumed.

A 2017 incident might be the reason Moroccan citizens are concerned. In 2017, discolored and unsanitary Eid al-Adha meat caused public worry. In response, ONSSA warned that the meat was not safe for consumption.

Citizens then speculated that the sheep were force-fed, injected with hormones or infected by bacteria.

In June, Morocco’s Minister of Agriculture Aziz Akhannouch discussed preparations for Eid al-Adha with the president of the Interprofessional Federation of Red Meat (FIVIAR).

The meeting was an opportunity to ensure better animal traceability and transparency in commercial transactions.

The minister warned that any failure or non-compliance with quality requirements of any link in the chain would cause all stakeholders to be severely punished.