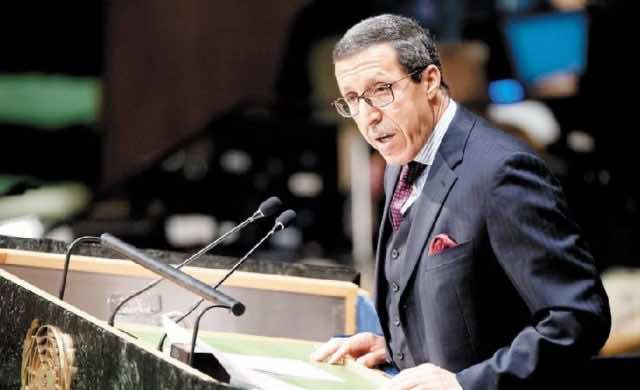 By
Ahlam Ben Saga
-
Ahlam Ben Saga is a Cultural Studies graduate from university Mohammed V of Literature and Humanities in Rabat.
Sep 15, 2018
Spread the love

At the first meeting of the Bureau of the Economic and Social Council (ECOSOC) on Tuesday, chaired by the permanent ambassador of Saint Vincent and the Grenadines to the UN, Inga Rhonda King, the UN elected Hilale as an ECOSOC vice president for 2018-2019.

The meeting was attended by the vice presidents of ECOSOC, Ambassador Tore Hattrem of Norway and Ambassador Teodoro Lopez Locsin Junior of the Philippines.

The humanitarian affairs segment is a platform that “brings together UN Member States, UN organizations, humanitarian and development partners, the private sector and affected communities,” states the UN.

Established in 1998, the segment has been in charge of all meetings and discussions of ECOSOC related to humanitarian issues. It has “affected people and other actors from a range of geographic groups on current humanitarian challenges.”

The segment provides an opportunity to discuss the activities and issues of strengthening “the coordination of the humanitarian assistance of the United Nations.”

The humanitarian segment meets annually in May and June, between Geneva and New York, to discuss ways to tackle the most urgent humanitarian issues.

This year’s session, themed “Restoring humanity, respecting human dignity and leaving no one behind: working together to reduce people’s humanitarian need, risk and vulnerability,” took place June 19-21 in New York.

According to Maghreb Arab Press, the 2019 session will meet in Geneva and will be marked by the adoption of the annual ECOSOC resolution on humanitarian aid, mainly for refugees.

In May and June, King Mohammed VI sent 113 tons of aid for the benefit of the people of Gaza, Al Quds (Jerusalem), following the Gazan tragedy during protests against the US embassy move to Jerusalem.

Morocco’s army also built a field hospital in the Gaza Strip to serve Palestinian victims of the violence as well as the general population. The hospital is equipped to handle vascular surgery, abdominal surgery, pediatrics, traumatology, ENT, ophthalmology, and other medical needs.

The field hospital has  97 staff, including 13 doctors and 21 nurses. A total of 25 tons of medicine were to be sent to enhance the hospital’s services.

The operation was a symbol of the historical and humanitarian solidarity of King Mohammed V towards Palestinians.