Rabat – In the past six years, the number of women who have lost their lives due to cervical cancer, which is often caused by human papillomavirus (HPV), has reached an alarming rate in Morocco and the rest of the MENA region.

The statistics are from the latest report of the International Agency for Research on Cancer (IARC).

The tragic results could be blamed on the lack of awareness about the disease and measures to prevent it.

Alim El Gaddari, Director of the International Treatment Preparedness Coalition (ITPC-Mena) stated: “The tragedy is that we know how to prevent, detect and treat HPV-related diseases, lack of political will, stigma and misinformation are all obstacles to overcome to eliminate these cancers and save lives.”

Causes of HPV, which often leads to cervical cancer, are various. According to England’s National Health Service (NHS),  “HPV is spread during sexual intercourse and other types of sexual activity – such as skin-to-skin contact of the genital areas or using sex toys – and is very common.”

Yet, HPV is not the only cause of cervical cancer, and other risks may include smoking.

HPV is a set of viruses rather than one virus.  There are more than 100 different types of HPV, says the NHS.

The effectiveness of HPV vaccination is close to 100 percent and is available in more than 90 countries including Senegal, UAE, and Libya since 2006.

The vaccine is currently offered as part of the National Immunization Program and is highly recommended by WHO since 2009, the report said.

“It’s time to vaccinate our children against HPV. A vaccine made today will save lives tomorrow,” states Aicha Kharbache, obstetrician, Head of Unit at Avicenne University Hospital in Rabat, and Vice President of the Moroccan League for STD Control.

In 2015, the Moroccan government finally introduced the anti-HPV vaccination to eliminate cervical cancer in line with Morocco’s 2025 health plan.

Arguably, the Moroccan society is still not fully aware of the importance of taking preventive measures against the disease.

For this reason, the Regional Coalition for HPV Elimination and the regional office of the ITPC are urging the North African country to give priority to raising awareness about HPV and introduce HPV vaccine into “the vaccination calendar for boys and girls aged between 9 and 13 years and to make available to all vulnerable populations under the age of 45.”

Early screening is equally important and must be done every three years by age categories from 25 to 65 years old.

The high cost of the vaccination, however, remains an issue, as equal access to treatment is very low. “coverage rates in Morocco do not exceed 10 percent.”

The total cost of cervical cancer care for one year after diagnosis is $13,589, whereas the cost of HPV vaccine obtained by countries similar to Morocco is around $9.58 dollars per dose, the report concluded. 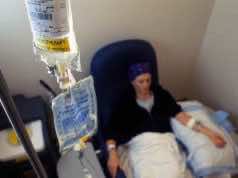