Marrakech will host the first session of the executive committee of FIFA January 15-19, 2019.

During the symposium, Infantino will review the possible World Cup bid of Morocco, Portugal, and Spain.

Spain proposed the bid during the visit of Spanish Prime Minister Pedro Sanchez to Morocco in November.

In a press conference with Head of Government Saad Eddine El Othmani, Sanchez said that the bid would unite the peoples from two continents. “We are launching a joint message, which is that this will be a bid between two continents. The King of Morocco is receptive and we’re going to work on it with Portugal. We are very excited about it,” said Sanchez.

Morocco, however, has not officially decided whether it will submit a solo or a joint bid with the European countries.

According to Spanish sports news outlet AS, the FIFA committee will discuss the “so-called continental rotation law to boost the Ibero-Moroccan candidacy to [host] the 2030 World Cup.”

The committee will also discuss the expansion of the World Cup from 32 to 48 teams in Qatar.

While Spain is hoping for a joint bid with Morocco and its Iberian neighbor, Portugal said it has not received an official proposal from Spain.

Portuguese Prime Minister Antonio Costa said that the proposal is “an uncertain idea that has never been officially put to us, and when it is we naturally have to study it.”

A World Cup held on two different continents is also not a preference for the president of the Union of European Football Associations (UEFA), Aleksander Ceferin.

Earlier this month, Ceferin said he is not “in favor of cross-confederation bids.”

“Someone should say once to the politicians it’s not up to them to speak if they will be hosts of the Euros or the World Cup or not,” said UEFA president.

Numerous countries have shown an interest in bidding to host the global tournament, including four Balkan countries, England, and three South American countries: Paraguay, Argentina, and Uruguay, in a joint bid. 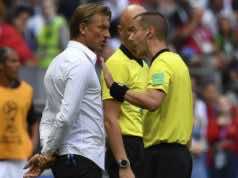