Rabat - The Netherlands has responded to outcry over its decision to arrest three Moroccan hip hop dancers and hold them for five days in a detention center for undocumented migrants.

Rabat – The Netherlands has responded to outcry over its decision to arrest three Moroccan hip hop dancers and hold them for five days in a detention center for undocumented migrants.

The spokesman for Consular Affairs for the Dutch Ministry of Foreign Affairs, Willemien Veldman, said that his country understood the three Moroccans’ views.

“Of course we understand the disappointment,” she told AFP.

The official, however, said that holding a visa does not “automatically give access to a country in the Schengen area.”

She added that the “border police are allowed to make their own assessment on admission” in the Schengen area.

The three dancers, Hamza, Ahmed, and Omar, expressed frustration over their detention in Rotterdam.

Aged 20 and 21, they arrived in the Netherlands on January 10 to take part in a dancing competition.

Maria Daif, former head of the Touria and Abdelaziz Tazi Foundation and of l’Uzine—the cultural center in Casablanca where the dancers rehearse—said that the Moroccan dancers were mistreated by the border police.

The dancers were asked to sign a document and asked intrusive questions like if they were suicidal or if they had ever had sex.

“They sign documents in Dutch that they don’t understand,” said Daif.

Hamza said that they felt scared after their arrest.

“I am not a criminal, I am an artist,” Daif quoted Hamza.

Another young Moroccan woman faced a similar issue in Brussels after after deciding to transit through Belgium on her way back to university in France. Unfortunately, she only had a receipt of her application for a French residence permit, which only allows her to land in France, where she studies at Lille University.

Rania Akrach’s plan did not pan out, and Belgian authorities arrested her and put her in a detention center, threatening to send her back to Casablanca because she did not have a Schengen visa. 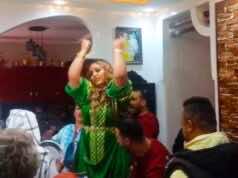