Moroccan female workers said they were subject of alleged sexual assaults from some managers in Huelva fields last year. 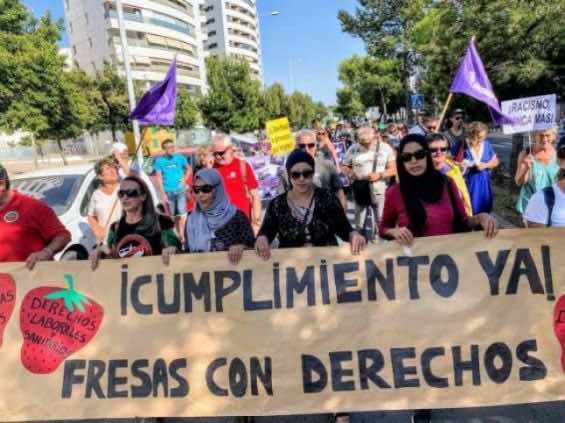 Spanish news outlet Rojo y Negro reported that a group of 300  activists launched a caravan which ended in Huelva where they protested alleged sexual assaults and violations of labor law in the region. Dozens of seasonal workers come to Huelva annually to work under contract.

“In the protests it has been remembered that [the Huelva Federation of Entrepreneurs (FOE)] is responsible for a plan that is clearly insufficient to protect the temporary workers,” the news outlet reported.

In May, a court in Huelva ordered the reopening of the case of Moroccan seasonal workers.

The seasonal workers accused their managers of sexual assaults.

The court previously closed the case on December 2018. The judge did not hear testimonies from the accusers.

The New York Times narrated the stories of some of the workers who are still stranded in Spain waiting for trial after they filed complaints against alleged harassers.

The US-based news outlet said that one  of the complainants is a pregnant Moroccan woman.

The pregnant woman said that her manager sexually harassed when she arrived in Spain to work.

“He pressured her to have sex, promising her a better life and working conditions,”  the New York Times wrote.

After refusing the manager’s demands, the woman said that the manager forced her to work harder.

She gave birth to her child in Spain.

“I feel depressed and I am scared to look for work,” the woman said.

The news outlet said the husbands of some sexual harassment victims had filed for divorce. They have also been “shamed and blamed” by some family members.

In addition to the New York Times, German investigative NGO Corrective published a story in collaboration with RTL Nachtjournal and Buzzfeed News released a report on Moroccan female agriculture workers.

In the report, women claimed they were harassed, verbally, and physically abused.

Morocco’s government has already reacted to the issue.

The Ministry of Employment issued a statement refuting claims that Moroccan seasonal agricultural workers in Spain were being harassed.

The ministry also explained that the working conditions of female Moroccan workers conform to the employment contract concluded between the two parties.