Morocco defeated Niger on Sunday’s friendly game as part of the preparation for the Cameroon 2021 African Cup of Nations qualifier.

Rabat – The head coach of Morocco’s national team, Vahid Halilhodzic, said on Tuesday, September 10, that he appreciated the spirit his squad showed in the two friendly games against Burkina Faso and Niger.

The national team defeated Niger by 1-0. Walid El-Karti scored the only goal of the match in the 21st minute. The first friendly match was against Burkina Faso on September 6. The match ended with a 1-1 draw.

Commenting on the two friendly matches, Halilhodzic said that he is satisfied with the performance of the football players and their state of mind.

However, the coach added that as of now, Morocco has no chance of qualifying for the World Cup.

“Everyone must accept this little truth that always hurts.”

The coach acknowledged that the players showed a very good team spirit during the two friendly games.

However, the new coach believes that the Atlas Lions delivered a good performance.  The Bosnian coach surprised Moroccan fans by up for local players from the Moroccan league.

The coach said that he observed different combinations of players to evaluate the potential of each on the ground in order to build his squad.

The coach seeks to give every player in the national team an opportunity to showcase their skills in the field.

Last week, Halilhodzic vowed to give a chance to all Moroccan football players representing the national team.

The coach added that the team’s main goal is “to improve the FIFA World Ranking  and achieve the best results in the upcoming African Cup of Nations (CAN).” 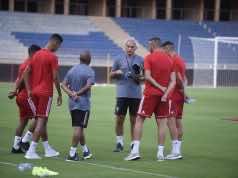