The highest number of cases are confirmed in South Africa, reaching a total of 4,361. The country has seen 86 deaths and 1,473 patients recovered.

Not far behind South Africa but with more than triple the number of deaths, Egypt has 4,319 confirmed cases, 307 deaths, and 1,114 recoveries.

Djibouti has the highest number of cases per capita with 1,023 cases reported in a population of about 110 million people—in the past two weeks, the country’s case numbers have dramatically increased. 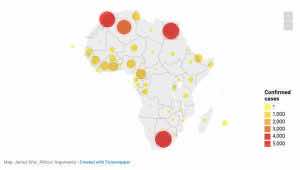 Last week, the UN estimated that COVID-19 could kill up to 3.3 million people in Africa due to more than half of the continent’s urban population residing in poor and densely packed areas.

Still reeling in the aftermath of the 2019 Ebola outbreak which resulted in the death of thousands throughout sub-Saharan Africa, pandemic miseries have hardly been able to let up.

The World Bank published an article earlier this month suggesting that sub-Saharan African countries that struggled to prevent the spread of Ebola are applying lessons learned to the COVID-19 pandemic.

Notable African intellectuals have called for self-sufficiency, continental-integration, and a “second independence,” citing the global pandemic as an opportunity for the continent’s leaders to reshape geopolitics.

Medical experts in Senegal and Nigeria have explained that in order to contain the spread of the virus, surveillance and screening are key, along with strong unity.

While challenges arise for African passport holders in China, the Africa Centres for Disease Control and Prevention (Africa CDC) is collaborating with Chinese medical professionals to present a special webinar, “Global MediXChange for Combatting COVID-19 (GMCC): The Experience of China.” The webinar is scheduled for April 28 and will host various medical professionals.