Since Morocco went into a state of emergency, police have arrested over 85,000 suspects for violating the lockdown.

Rabat – The actions of six individuals in Kenitra forced a police chief inspector to use weapons against them to prevent violations of the state of emergency, a statement from Morocco’s General Directorate of National Security (DGSN) announced.

The suspects were carrying knives and are facing assault and battery charges, in addition to violation of the nationwide lockdown.

The incident took place on Tuesday, May 5, in the El Wahda neighborhood, eastern Kenitra.

A police patrol intervened to arrest the group for allegedly threatening to use knives against citizens, leading to violent confrontations.

The chief inspector used his gun to neutralize the danger and arrest one of the suspects, the DGSN said. The bullet’s fragments accidentally and superficially injured two people after they hit the ground.

The two injured individuals as well as the chief inspector, who suffered a concussion, received treatment at the hospital.

Investigations continue to determine the extent of the injured people’s involvement in the incident, while the six suspects remain in custody, pending investigations.

Despite a significant decline in crime rates since Morocco entered a state of emergency on March 20, police officers continue to perform thousands of arrests every day, mainly against people who violate the lockdown.

By the end of April, Moroccan police had arrested over 85,000 suspects for not respecting the country’s state of emergency.

More than half the suspects, nearly 45,000, went to court following their arrest.

Casablanca accounts for the majority of arrests, with over 11,000, followed by Rabat, Kenitra, Marrakech, Oujda, Agadir, Tetouan, and Sale.

Charges mainly include gathering in public, inciting citizens to gather, and not carrying an exceptional movement permit.

To monitor citizens’ compliance with the state of emergency, the DGSN launched a mobile application to track their movements.

The application is currently in use in Rabat, Sale, Temara, Casablanca, Fez, and Tangier, and is set to be generalized to other Moroccan cities.

As of May 6, police carried out a total of 424,072 security control operations using the tracking application.

DGSN has also launched an online platform allowing citizens to report any state of emergency violations in all anonymity. 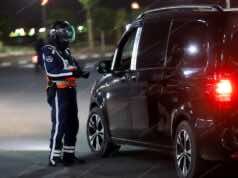