According to recent reports, Algerian authorities have closed several churches and other places of Christian worship across the country.

Rabat – The European Parliament has once again drawn the attention of the European Commission to the multiple violations the Algerian government is carrying out against its population, notably the oppression of Christians living in the country.

In a parliamentary question addressed to the European Commission on May 13, European deputy Maria Soraya Rodriguez Ramos denounced human rights violations against religious minorities in Algeria.

The deputy asked the European Commission to take action against the Algerian government for preventing Christians living in Algeria from practicing their religion.

The question came as a follow-up to the European Commission’s Resolution 2019/2927, adopted on November 28, 2019. The resolution, which received the vote of the majority of European deputies, denounced the repeated violations of the Algerian government against the human rights of its population.

Resolution 2019/2927 revealed that “since January 2018, Algerian authorities have closed several churches, most of which belong to the Protestant Church of Algeria (EPA), the central organization, legally recognized, of protestant churches in Algeria.”

In response to the closure of churches, the resolution called for “an end to the violations of the freedom of worship of Christians, Ahmadis, and other religious minorities” and urged the Algerian authorities “to reopen the places of worship in question.”

In October 2019, the Jerusalem Post reported the closure of three large churches in Algeria and the arrest of several Christians who organized sit-ins to protest the shutting down of their places of worship.

“The closure of churches and Christian institutions is justified by new state safety regulations for buildings. In recent weeks, some registered Protestant churches have received visits from officials, the fire brigade, and police. Other Christian communities are still waiting, with great concern, for the outcome of this review for them,” the report said.

In its 2020 report, the USCIRF put Algeria on its “Special Watch List” due to the persecution of religious minorities.

“In 2019, Algeria escalated its ongoing repression of religious minorities. The government systematically cracked down on the Evangelical Protestant community in particular through a string of church closures and raids, including two of the largest Protestant churches in the country,” the report said.

According to the USCIRF, the recent wave of church closures has been ongoing since November 2017 and “worsened” in 2019.

“Officials have made arbitrary demands that churches cease all religious activities, accusing them of violating safety regulations, operating illegally, or evangelizing, or giving them other justifications for sealing off their places of worship,” the report added.

The Algerian government did not allow the Association of Protestant Churches in Algeria to officially register since a new law on associations came into effect in 2012 and required churches to reapply for official authorization, the USCIRF recalled.

The EPA represents 45 churches in the country, including 12 that Algerian authorities closed, particularly in the northern Tizi Ouzou and Bejaia provinces.

The American report also denounced the Algerian government’s “systematic restriction on non-Muslims’ ability to register, operate houses of worship, proselytize, and practice their faith in other ways.”

Algeria’s Ordinance 06-03, passed in 2006, places unique limitations on non-Muslims and requires them to register formally with the National Commission for Non-Muslim Religious Groups, “which reportedly meets rarely and has not issued permits for any churches.”

In addition to official and governmental institutions, several NGOs have also criticized the Algerian regime’s violations against the human rights of religious minorities.

The International Christian Concern (ICC), a non-governmental and non-partisan organization based in Washington, D.C., commended the “strong position” the USCIRF demonstrated in support of religious minorities in Algeria, saying it “sends a strong message to the Algerian government that its systematic disregard for religious freedoms is no longer acceptable.”

In the same context, the ICC called on Algerian leadership to “take note of what its allies are saying”  and reopen closed churches to ensure an environment that protects the right to worship for all Algerian citizens and residents.

While international calls for religious freedom in Algeria are gaining more volume and frequency, it remains to be seen whether the Algerian government will be responsive and adopt a more tolerant approach in its management of religious matters. 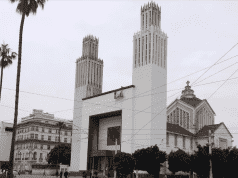 Ahead of Pope’s Visit, Morocco Celebrates Coexistence with Christians