Since the start of the Libyan crisis, Moroccan diplomacy has remained neutral and called foreign powers to let Libyans handle their internal conflicts without intervention.

The meeting on Wednesday, July 8, brought together 30 foreign ministers and aimed to discuss the situation in Libya amid the ongoing civil war.

“Morocco expresses its concern, disappointment, and call for mobilization regarding the continued deterioration of the situation in Libya,” Bourita said.

The political, military, economic, and humanitarian situations have further worsened in Libya, while other countries were busy focusing on the COVID-19 pandemic, the Moroccan FM stressed.

“The coronavirus did not make the situation [of Libyans] any better,” he added.

“Let us be realistic and pragmatic in addressing the situation. The proliferation of initiatives has an opposite effect,” he continued.

The Moroccan FM then emphasized that foreign intervention “is not helping in any way the Libyan parties to rise above narrow interests and to face the challenge of forging together a better future for Libya.”

“Libya should not be regarded as a lucrative diplomatic business,” Bourita said, hinting at the countries that are making profit from the civil war through supplying arms to the warring parties.

The solution to the conflict must be political rather than military, Bourita insisted, adding that the solution must come from the Libyans themselves and must guarantee the unity, territorial integrity, and national sovereignty of Libya.

The Moroccan FM recalled the Skhirat Agreement, signed in 2015 in Morocco, saying it is the only political framework available for solving the crisis.

“The political agreement signed in Skhirat may not be the perfect deal,” he admitted, “however, no equal alternative is on the table.”

The Libyan people must themselves adjust and update the provisions of the Skhirat Agreement, he added.

The UN Support Mission in Libya is an important instrument to achieve peace, according to the minister, but it needs further improvements and restructuring.

At the end of his speech before the UN Security Council, Bourita presented several alarming statistics about the situation in Libya.

According to the minister, 2,356 people have died in Libya due to the conflict in the past year, including 400 civilians. The number of displaced people and refugees also continues to rise and has already reached more than 400,000 internally displaced Libyans and nearly 50,000 refugees and asylum seekers.

In terms of economy, the decline in Libya’s GDP growth is estimated at 58.7% in 2020, while the inflation rate is expected to increase by 22%, Bourita said.

“Libya is not only a neighbor to Morocco. It is a brotherly country, with which we share a common history, common bonds, common interests, and a common destiny,” Bourita affirmed.

“For us, Libya is not just a diplomatic issue. Our stability and our security are depending on the situation in Libya,” he concluded. 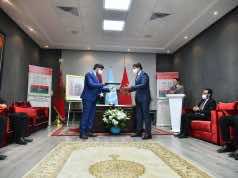