The two countries are presiding over the UN’s Group of Friends on Climate. 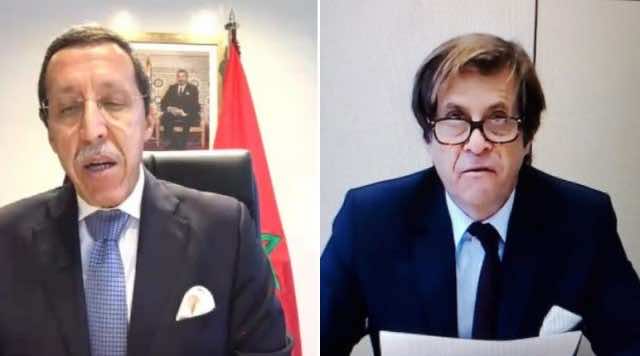 The Moroccan and French officials presided over the meeting in their capacity as co-chairs of the UN’s Group of Friends on Climate.

The meeting aimed to stress the importance of addressing climate change, despite the current global context marked with a focus on the COVID-19 pandemic.

In his opening speech, Ambassador Hilale recalled that 2020 marks the fifth anniversary of the drafting of the Paris Climate Agreement in 2015.

In this regard, the Moroccan diplomat stressed that Morocco remains determined to actively participate in the global fight against climate change, despite the current difficult health and economic context.

“The Kingdom maintains its ambition for climate action, ensuring food security, and accelerating the energy transition,” he said.

According to Hilale, Morocco’s efforts are focused on rebuilding the economy after the COVID-19 pandemic in a more sustainable way.

The Moroccan ambassador also drew the participants’ attention to the disproportionately difficult climate change challenges in developing countries, most notably in Africa.

“We must not lose sight of the fact that developing countries are facing the worst climate repercussions, especially in the African continent,” he said.

As the world begins to plan for a recovery from the pandemic, the Group of Friends on Climate must urge governments to seize the opportunity for “rebuilding a better future” by creating “more sustainable, resilient, and inclusive societies,” Hilale continued.

President of COP21 in Paris Laurent Fabius reiterated Hilale’s calls, stressing that the year 2020 is decisive for the fight against climate change.

“Even if COP26 is postponed due to the COVID-19 pandemic, it does not mean that we must forget the objectives set for 2020,” he said.

Meanwhile, President of COP22 in Marrakech Salaheddine Mezouar highlighted the opportunities the current health crisis offers to “reshape the global economy into a green, fair, clean, and resilient economy.”

The Moroccan politician also warned that Africa remains the hardest-hit continent by the health crisis and its economic impact, which could lead into a humanitarian crisis.