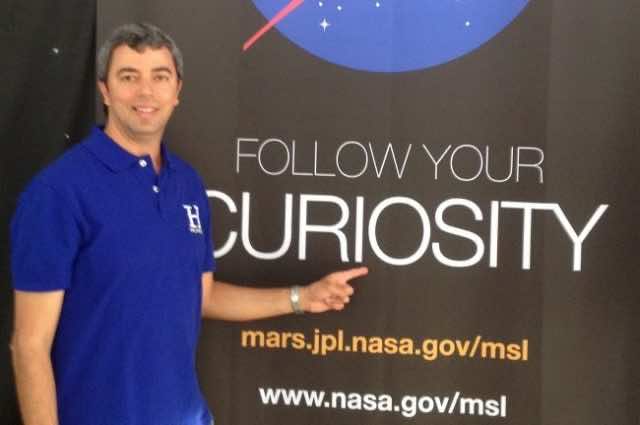 California – Since his childhood, Dr. Kamal Oudrhiri was always fascinated by the vastness of the universe and its mysteries.

As a young child, Kamal Oudrhiri was captivated by the images published in the magazine “Science et Vie” of Voyager I and II’s exploration of the solar system. Destiny combined with focus, passion, hard work, and a sense of adventure allowed him to become a key scientist at the NASA Research Center that built the twin Voyager spacecrafts that were launched in 1977 and continue to send valuable scientific data to earth.

With a career spanning over two decades working at NASA in earth and planetary science, Kamal Oudrhiri has played a key role in historic missions including Cassini, with an objective to study Saturn and its system, Grail (to study the moon and its interior structure), and multiple Mars missions including The Mars Exploration Rovers (MER) “Spirit” and “Opportunity” and the most recent and challenging landing of Curiosity.

Kamal Oudrhiri has been acknowledged with multiple NASA achievement honor awards and numerous recognition awards from the planetary scientific community.

In 2003, Kamal Oudrhiri transferred his passion for science and exploration into Grove of Hope, a nonprofit organization that provides hands-on educational outreach to children with the hope of sparking a life-long curiosity for careers in science and technology.

The following interview took place at the NASA Research Center in California.

MWN: What are your inspirations or motivations?

Kamal: As a child, I was inspired by my roots and family traditions. My great-grandmother was very dynamic. She managed four Hamams (Moroccan traditional baths) when other women her age were restricted to go out alone. From her, I learned that determination and hard work are necessary to overcome obstacles in life. I also learned from my great-grandfather, a government accountant whose main job was to regulate cost and quality for consumer protection, how to put a community’s interest before personal gain. These core values from my great grandparents are constant guidepost in my life.

MWN: What are some of the stories that were told from your great grandmother that inspired you?

Kamal Oudrhiri: One story that comes to mind deals with “Dar sherifates.” My great grandmother told me about a foster house for women who became widows and had to care for their families. Women from the community volunteered to teach these widows how to make traditional Moroccan slippers and clothing and how to bring their products to the market place.  This humanitarian act allowed thousands of women to gain independence and provide for their families.

A second story involved “Zarzay,” a Moroccan word for a trustworthy deliveryman.  During those days, Zarzays were often elderly gentleman that had earned respect from the community since they were entrusted to carry valuable personal goods from one house to another.  One of Zarzay’s lost traditions involved a special deed in which Friday worshipers would buy groceries for a family in need with the Zarzay delivering the groceries without revealing the source of the provider and the family in need.  Thus, the Zarzay allowed the providers to stay humble and the family in need to not have their dignity compromised.  In my opinion, this story emphasizes the importance of a community that believes in modesty, trust and the dignity of its citizens and thus satisfying the key requirements for living in peace and harmony.

MWN: Besides your grandparents, did anyone else help shape your personality and to whom do you credit for your success?

Kamal Oudrhiri: Of course my parents and my immediate family.  My teachers also were a great inspiration to me. They showed so much dedication and commitment to teaching. I felt that they were very passionate about teaching. They engaged us in the learning process despite the lack of resources. Here, I want to highlight that having just a few resources should not hold us back from the pursuit of academic excellence. With limited resources we can open up a child’s imagination to the universe. For example, we can teach a child the basic physics of flight and the fundamentals of aerospace engineering just by using papers and other simple tools.

MWN: Your creativity and passion went beyond science and space exploration. What can you tell us about your preoccupations outside of work?

Kamal Oudrhiri: In addition to the work I do with Grove of Hope in Los Angeles and abroad, I have a love for traditional Moroccan music, art, and culture.  In 2005, I founded The Moroccan American Cultural Center of Los Angeles (MACCLA) that aims to bringing both Moroccans and Americans together by highlighting the commonalities in the two cultures.  We regularly collaborate with renowned Universities in California to produce traditional Moroccan concerts, poetry readings and other academic and social activities.

MWN: What is your message to the Moroccan students in Morocco or here in U.S.?

Kamal Oudrhiri: I want to say that in addition to a purpose in life there must also be passion.  Numerous studies have shown that only 11 percent of people around the world are happy with their daily jobs. So strive to be part among the 11 percent and find out what moves you. Remember that it is OK to make mistakes, but when you do, learn to take full responsibility for your actions, regroup and try again. Search your childhood and find the people who left a strong and positive impact on you. Do a self-inventory and know the things that you are most passionate about and do them. When you are passionate about what you do, you will excel. No one can inspire you more than yourself.