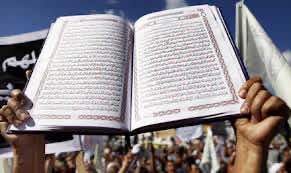 According to a new Pew Research Center survey, adherents of Islam are “deeply committed to their faith and want its teachings to shape not only their personal lives but also their societies and politics.”

The report was released Tuesday by The Pew Research Center’s Forum on Religion & Public Life, an American think tank organization based in Washington, D.C. that provides information on issues, attitudes and trends shaping the United States and the world. “The World’s Muslims: Religion, Politics and Society” finds that Muslims in Africa, Asia and the Middle East overwhelmingly want to see Islamic law, known as Sharia, be “the official law of their country.”

Muslims’ desires to see the Sharia law in force in their counties are widely varied. “Support for making Sharia the official law of the land tends to be higher in countries like Pakistan (84 percent) and Morocco (83 percent) where the constitution or basic laws favor Islam over other religions,” says the report.

However, the survey finds that Muslims, even in many countries where there is strong backing for Sharia, are tolerant towards other religions and most of them favor religious freedom for people of other faiths, and Sharia laws are to be applied only to Muslims.

Even though there is considerably less support for severe punishments, such as cutting off the hands of thieves or executing people who convert from Islam to another faith, 38,000 Muslims, interviewed in 39 countries across Europe, Asia, the Middle East and Africa, are in general more comfortable with using Islamic law in familial affairs including marriages, divorces, devising wills and resolving disputes.

In the 39 countries surveyed, the majority believes that a woman should be able to decide for herself whether to wear a veil, while most Muslim women and men share the same opinion that a wife is always obliged to obey her husband.

With the exception of a few countries surveyed, a majority of Muslims say that “Islam is the one true faith leading to eternal life in heaven and that belief in God is necessary to be a moral person.”

Contrary to some erroneous stereotypes, nearly all Muslims interviewed finds no contradiction between Islam and science, being religious committed and living in a modern city, or calling for democratic values and having strong support for Islam to play a role in politics.

In half of the countries where the question was asked, majorities of Muslims want religious leaders to have at least “some influence” in political matters, and sizable minorities in Asia, the Middle East and North Africa think religious leaders should have a lot of political influence.