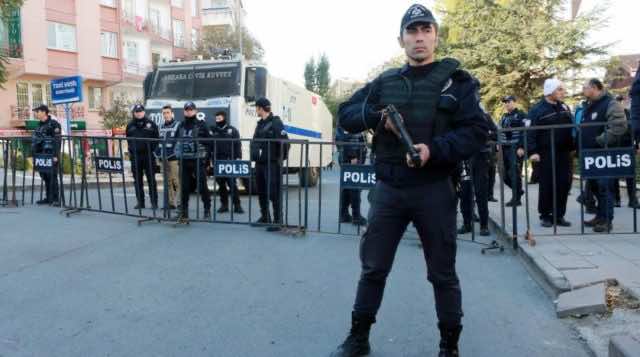 By
Chaima Lahsini
-
Chaima Lahsini is freelance journalist and activist with the Al-Fam collective in Rabat.
Nov 9, 2017
Spread the love

Turkish authorities issued 245 arrest warrants against the ISIS suspects, 101 of which were arrested this morning while the others are still being wanted by the police, according to state-run news agency Anadolu.

One-thousand five-hundred police officers were mobilized for this massive raid across the Turkish capital, sweeping through over 250 different addresses where documents and digital material linked to the terrorist organization were seized.

According to the authorities, some of the arrested suspects fought in the ranks of the group in Iraq and Syria.

On October 29, Turkish police arrested 50 alleged members of the Islamic State, who were suspected of planning an attack during Turkey’s national holiday, according to Anadolu. Forty-nine of them were detained in Ankara one day before the celebration, while four other suspects were arrested in Istanbul.

The republic has been the target of several bloody attacks carried out by ISIS militants over the past two years, including a mass shooting during the last New Year’s Day celebrations at an elite Istanbul nightclub. Three Moroccans are among the over 40 people who were injured during the terrorist attack.

Turkey’s interior ministry said in July that there had been 14 major terrorist attacks conducted by ISIS in country, including 10 suicide bombings, one bomb attack, and three armed attacks. A total of 304 people were killed in these attacks, including 10 police officers and one soldier.

While attacks have significantly decreased since then, tensions remain high, and Turkish police launch raids almost daily against suspected ISIS cells across the country.

In September, Turkish police detained 74 suspects who were alleged members of ISIS. At the same time, President Recep Tayyip Erdogan claimed that at least 3,000 ISIS militants were killed by Turkish forces in northern Syria.

Turkey has also deported at least 5,000 terror suspects and banned another 53,000 people from entering the country, according to Anadolu.