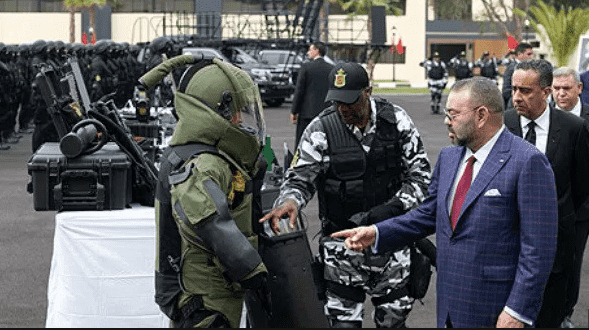 During his visit, King Mohammed VI offered his thanks to the DGST members for “the tireless efforts and considerable sacrifices made by the members of this security institution, to guarantee the peace and security for the citizens, to protect their property and to preserve peace, stability and public safety,” according to Maghreb Arab Press (MAP).

The King also commended the spirit of mobilization, vigilance, and resolve shown by the DGST members in order to anticipate and defeat all abject terrorist and criminal conspiracies against the country.

The monarch’s visit symbolizes his readiness to provide the security body with all means necessary to fulfill its national and professional mission, in line with his 2016 Throne Day speech urging the government to fully support the national directorate.

During his visit, the monarch inquired about the units of the Rapid Response Task Force and reviewed equipment, vehicles, and logistics used in security operations to curb the dangers of terrorist threats and other forms of organized crime, including cross-border crimes.

Subsequently, the King inaugurated the new Institute of Specialized Training and visited its various sections.

The Specialized Training center is an integrated security complex, built on 35,000 square meters, as part of the development of the intelligence training system.

It consists of a lecture room, 12 study rooms, a laboratory for teaching of foreign languages, a conference room, and a library, in addition to infrastructure for trainers and administrative staff.

The complex also includes residences for housing, a medical office, and a gym and sports room.

The complex also has an armory that meets the required standards for sensitive security buildings, an ammunition depot, a shooting range, and a training course for the exercises to which officials of the security institution are subject.

Officials provided presentations to King Mohammed VI on the new institute, inaugurated as part of the royal vision for the modernization of the public security service and the reinforcement of the principles of the new security governance, Including the Counter-terror Bureau (BCIJ).

The royal visit comes one week after the King’s return from France, where he spent several weeks recovering from his successful heart surgery.