Rabat - Marrakech is getting its own trendy avenue: M Avenue. The immense project, scheduled to open in 2019, will give the red city a new face, displaying modernity, culture, and entertainment. 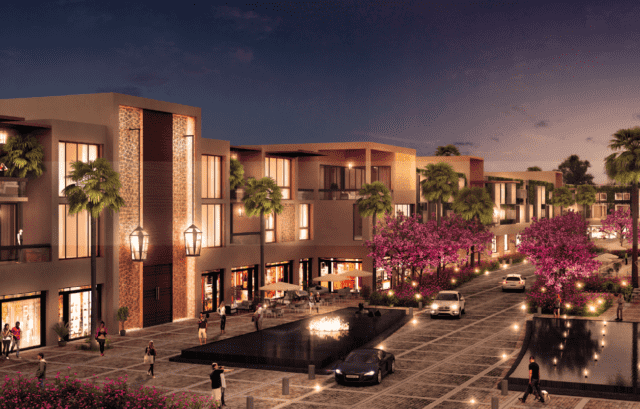 Rabat – Marrakech is getting its own trendy avenue: M Avenue. The immense project, scheduled to open in 2019, will give the red city a new face, displaying modernity, culture, and entertainment.

M Avenue will begin as an extension of Avenue Moulay El Hassan, which leads west from Marrakech’s medina (walled city) towards Hay Menara neighborhood. The avenue will lead up to and end at the Avenue de la Menara, near the Four Seasons Resort.

The promoter of the project, Nabil Slitine, who is also general manager of the Downtown Hotel Corporation, shared some details about the new avenue that he calls “revolutionary for the touristic city.”

Speaking to Morocco World News, Slitine explained that M Avenue will be a multi-faceted and innovative project in Marrakech, hosting a mix of hotels, residences, offices, shops, restaurants, and art galleries.

‘Still something missing in Marrakech’

The project builds on the history of Marrakech, which began with its foundation in 1062, by Youssef ben Tachfine, the head of the Almoravid dynasty. The Almoravids established schools of Qur’anic theology and conquered all of Morocco. Ben Tachfine is considered the father of Morocco.

Marrakech’s rich past has attracted scores of tourists and many celebrities to the city, an asset Slitine’s plan expects to capitalize on.

The general manager came up with the idea while travelling the world.

“I told myself there was still something missing in Marrakech. We had this land of 5 hectares next to the hotel Four Season. The M Avenue idea came to me to really create a concept, especially cultural, with several components.”

Slitine’s ambition was to launch a new urban destination in Marrakech with a residential sector, a cultural sector, and a business center.

“Our vision is to create a destination that represents the new Marrakech. When people come to Marrakech, they see this side that we all know: the traditional one. With the M avenue, I want them to see the other side, the one we want to create through artistic work and new concepts with modern architecture,” explained Slitine to MWN.

Marrakech: A return to home

In the mid 1990s, Nabil Slitine obtained a civil engineering degree, as well as a master’s in business administration in the United States, where he lived for 16 years.

Slitine worked as an engineer and manager in several multinational companies before he decided to create his company: a startup focused on new technologies and the internet. He met immediate success.

Feeling homesick, the entrepreneur decided in 2006 to come back to Marrakech, where he was appointed general manager of EHC Morocco, a subsidiary of Kingdom Hotel Investments.

His first major project was to develop and build the Four Seasons Resort Marrakech, as well as the 43 villas and riads that surround it.

In 2012, he formed the Downtown Hotel Corporation with international investors. For the past three years, he has been working on the M Avenue project.

Slitine wants to offer the visitor an interactive and immersive trip beyond the handicrafts of Morocco and the landscapes of Marrakech, to bring him to understand the city beyond the scenes of the medina, and to interest him in the palace gardens.

M Avenue started construction in 2017, and the total project will cost MAD 680 million, revealed Slitine to MWN. It covers an area of 5 hectares with a mix of hotels, residences, offices, shops, restaurants, cafes, art galleries, and a cultural center.

The 500-meter-long avenue will be composed of 20,000 square meters of commercial space, 65 residential apartments under the brand M Residence, 88 Four Seasons apartments, the 174-room CR7 hotel, a 4,5000 square meter business center, and a luxury clinic.

In addition to a luxury concierge service, future apartment owners will benefit from valet parking and security as well as all the services of the Four Seasons Hotel Marrakech. The first apartments will be delivered this year, say the promoters of the project.

Slitine is also launching a project called M Bab (door), a cultural avenue that extends beyond M Avenue about 4,000 square meters. The building and multimedia scenography will be created by a team of spatial media specialists from the German Tamschick Media and Space and the Spanish Boris Micka Associates.

M Avenue also includes a business center occupying 4,500 square meters, and the rest is dedicated to gardens and landscaped areas. Indeed, the vision of the project is to make it a trendy international destination for design, fashion, recreation, and culture.

The project even attracted the interest of the US daily New York Times, which wrote about the project’s ambitions on August 29.

Marrakech, a sure value

M Avenue seeks to enhance Marrakech’s reputation as a tourist hub. On travel lists, the red city ranks as the top destination to visit in Morocco. In 2017 alone, Marrakech received two million tourists.

The city maintains a vibrant nightlife. In the modernized areas, clubs and casinos are open late, while the historic Jemaa el-Fna, one of the largest open-air markets in the world, reaches the peak of its wonder at night.

“Marrakech has been able to develop its product through the creation of 22,500 beds since 2010, due to the increase in investment and the support and monitoring of tourism projects,” said the regional tourism delegate in Marrakech, Fadoua Chbani Idrissi, to the Maghreb Arab Press Agency (MAP) earlier this year.