Did Morocco cancel the trip due to the Romanian prime minister’s decision to move the Romanian embassy in Israel to Jerusalem?

Rabat – Morocco has reportedly requested the postponement of a visit planned by Romanian Senate President Calin Popescu Tariceanu to the North African country.

Sources told Romanian outlet G4 Media that the Moroccan government might have canceled the meeting due to a busy agenda.

“The Moroccan side has transmitted via diplomatic channels that it was not available for meetings.”

The news outlet reported that Tariceanu’s official visit to Morocco was scheduled for March 27-31.

“It was postponed at the request of the Moroccan party, to be reprogrammed for a later period, to be agreed upon.”

Morocco’s alleged decision followed the announcement of King Abdullah II of Jordan that he would cancel his visit to Romania this week. He visited Morocco instead in response to Romania’s Prime Minister Viorica Dancila announcing plans to move her country’s embassy in Israel from Tel Aviv to Jerusalem.

MAP reported that the Ministry of the Royal Household, Protocol, and Chancellery said that King Mohammed VI will meet King Abdullah II to hold official talks.

Morocco’s alleged decision to postpone the Romanian official’s visit to Morocco King Abdullah’s cancellation of his visit to Romania suggest that both monarchs will discuss the Palestinian cause and US President Donald Trump’s proclamation recognizing Israel’s authority over the Golan Heights.

According to G4 Media, Romanian President Klaus Iohannis criticized Dancila, accusing her of being “responsible for canceling King Abdullah II’s visit to Romania, who felt personally offended by her statements on the relocation of Israel’s Embassy from Tel Aviv to Jerusalem.” 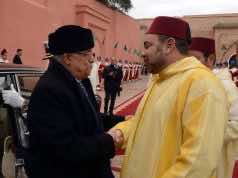