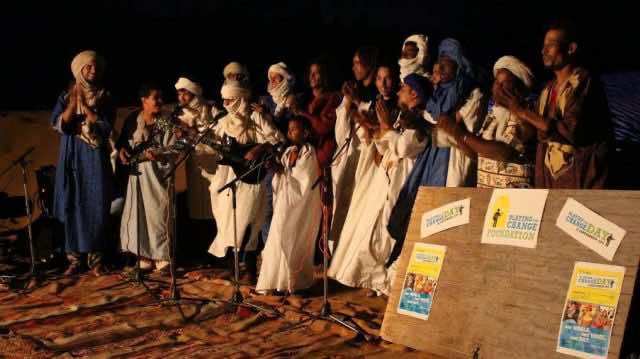 Rabat – A fire rages in the jungle as all the animals watch in shock.

It collects a drop of water from the nearest stream and races back to the fire, over and over, drop by drop, while the larger animals — like the elephant whose trunk could deliver so much more — stand watching.

Eventually they ask, scoffing, “What do you think you can do? You’re too little!”

Without pausing, the hummingbird answers: “I’m doing the best I can.”

Two-thirds of Morocco’s oases have disappeared over the last 100 years. Halim Sbai tells me the story of the hummingbird as he describes the challenges facing his native desert oasis city M’Hamid El Ghizlane. Early in our conversation, I can already hear the hummingbird in his approach.

Sbai first channeled local change through music in 2009. He organized the Taragalte Festival, set to celebrate its tenth edition in November, to preserve natural and cultural heritage by bringing music and life to this city on the desert’s edge. Halim Sbai saw the festival as a platform to address critical issues like climate change.

The oasis, like so many in Morocco and across the Sahara, is severely threatened by desertification. The population’s ancestors farmed, herded, and flourished, but water scarcity has taken its toll. Where date palm and fig trees once covered a lush landscape, the desert encroaches ever closer.

When I ask him directly, “why music to draw attention to environmental degradation?” he points out that I contacted him because he “made some noise.” This is the desert approach.

“When you travel across the desert, and you feel very small,” he explains, describing the Saharan way, “you need to make some noise.”

To experience music, he continues, involves joy and connection. Two people may share a space, speaking different languages and keeping their distance. When music starts up, they begin to dance, they begin to laugh, and they connect through the world’s strongest, universal language – music. It is such a powerful experience that the festival now draws attendees from all corners of the globe.

These visitors – including from countries largely responsible for the climate crisis – get a look at the real-life impacts of climate negligence. The meaningful communal experience can inspire.

The Playing For Change Foundation (PFCF) connected with Sbai and other locals in 2015, and opened the Joudour Sahara Music School for 15 children in 2016. International stakeholders saw the promise of providing education for M’Hamid’s new generation in driving locally-appropriate development.

The children play rhythms and instruments from a variety of traditions, all long part of the diverse Saharan city’s cultural fabric. They attend regular classes and participate in special events, change-drivers in the making.

Each April, Earth Day enthusiasts can listen to guitar tunes amplified on solar-powered speakers. They can also enjoy students’ poetry and songs about the importance of environmental preservation. Students, locals, and visitors plant trees in the threatened oasis, accompanied by desert rhythms.

The Joudour school does more than teach music. It harnesses the universal power of song to address desertification. This is the approach Sbai has embraced to build M’Hamid’s human capital, bring in powerful actors, and fill in the gaps of the country’s development efforts.

Sbai sees this national development narrative fail at the community level. He emphasizes that King Mohammed VI’s development vision and passion align with the people’s needs. But as policies trickle down from Rabat to community levels, profit-seeking and corruption disrupt progress.

One famously failing initiative involves watermelons. Morocco’s government provides funding for agricultural development, but profiteers invest in the water-intensive fruits and further desiccate Morocco’s south. They take M’Hamid’s water for profit, says Sbai. And when they have depleted water, they move on to the next place, and they kill it.

Sbai is passionate about properly constructing dams, harvesting rainwater, and drawing on reservoirs to supply the area’s water needs. Water falls from the sky to the sands, but like the “parachute policies” he describes from Rabat, water isn’t successfully harnessed. Instead, desert water from the High Atlas Mountains is woefully mismanaged.

Halim Sbai is hopeful that involving the right actors in development projects can make the King’s and the community’s shared vision a reality. This requires officials who are familiar with local culture and local challenges.

Sustainable water management through dams and reservoirs can reverse the Draa Valley’s desertification and once again support a thriving community, he stresses. But this requires engaging the right government stakeholders. This requires making noise to call in top-down non-governmental actors. It also requires supporting young people to meet them with bottom-up approaches to ensure projects actually meet community needs.

Halim Sbai’s voice rings with pride as he speaks of providing opportunities for Joudour’s female students. When he attended school 40 years ago, his fellow classmates were exclusively boys. Now the community school and the music school educate both girls and boys, empowering the youngest generation as a whole to change the oasis’ trajectory.

Approximately 7,500 people now populate M’Hamid. Despite well above replacement level birth rates, the town’s numbers have steadily declined from around 9,000 since the 1970’s. Environmental pressures continue to stall agriculture and other traditional activities. Sbai envisions turning this trend around and inspiring immigration from the big cities to the oasis.

He describes how M’Hamid is now composed largely of an older generation and their grandchildren. Working age residents have left to major cities to find gainful employment and support their families back home.

Higher levels of education have also shifted the community dynamic. M’Hamid requires different livelihood opportunities to retain its educated base, Sbai underlines. This is starting to manifest, with many of today’s younger generation working in tourism, on the same lands where their grandparents farmed and herded, or perhaps freely roamed as desert nomads.

Environmental degradation and a lack of employment opportunities are two major drivers for out-migration. Proper water management, Sbai tells me, promoted by a musical platform and responsible tourism, can help to reverse the rural-to-urban migration trend.

“Music isn’t a miracle,” he stresses. A hummingbird can contribute one drop at a time, a child’s guembri tunes can touch one group of visitors at a time. But music can open a door for development and warmly invite the world to join in.