The new water program has a budget of MAD 115.4 billion and aims to guarantee water security and combat the effects of climate change.

Rabat – The Intergovernmental Panel for Climate Change (IPCC) projected a continued warming trend in Morocco. Every decade since 1970, the average temperature in Morocco increased by 0.5 °C, exceeding the global average by about 0.15 degrees.

Reports mention that temperatures in Morocco could keep increasing by up to 7 °C by 2100 unless serious preventive measures are taken.

Over the next 20 years, IPPC estimates Morocco will become more vulnerable to drought and other extreme weather events.

In order to prevent these consequences, Morocco has decided to adopt a new national program for water.

The Moroccan government signed the framework agreement for the implementation of the 2020-2027 national program for drinking and irrigation water supply on Monday, January 13.

King Mohammed VI, accompanied by Prince Moulay El Hassan, presided over the signing ceremony at the Royal Palace in Rabat.

The agreement defines the methods of implementing and financing the MAD 115.4 billion program.

The plan aims to consolidate and diversify Morocco’s drinking water supply, to guarantee water security, and to combat the effects of climate change.

During the ceremony, Minister of Equipment, Transport, Logistics, and Water, Abdelkader Amara, gave a speech outlining the program. The ministry, he said, developed the program, which revolves around five main actions, to combat the water situation in Morocco.

The program also aims to reuse treated wastewater in the irrigation of green areas, with a budget of MAD 2.3 billion for it. Raising awareness about the importance of preserving water resources and rationalizing their use (MAD 50 million) is another key aspect of the plan, said the minister.

The general budget of the State will finance 60% of the program’s budget, while other stakeholders, mainly the National Office of Electricity and Drinking Water (ONEE) will fund 39% of the projects. As for the remaining 1%, it will be part of the public-private partnership, added Amara.

The official also announced the different committees to monitor the implementation of the program. Morocco’s Head of Government, Saad Eddine El Othmani, will chair a leading committee, while Amara will lead a technical committee. Finally, Governors of the different Moroccan regions are set to preside regional committees.

The minister announced that several regional delegations have made an inventory of 909 sites that are likely to house small dams and hill dams. Morocco has currently 130 operating small dams and 20 still under construction, he added.

The program includes the exploration of groundwater to mobilize new resources and the construction of new seawater desalination stations. Morocco has already built four similar stations in the cities of Laayoune, Boujdour, Tan Tan, and Akhfenir, all in southern Morocco.

Two desalination stations are also already under construction in Agadir and Al Hoceima, while three others are scheduled in Casablanca, Dakhla, and Safi, concluded Amara.

Meanwhile, the Minister of Agriculture, Fisheries, Rural Development, and Waters and Forests, Aziz Akhannouch, announced that the 2020-2027 program will supply irrigation water to an overall area of 510,000 hectares and will benefit 160,000 farmers.

Speaking at the signing ceremony, the Interior Minister, Abdelouafi Laftit, stressed that the program aims to fight precariousness and water scarcity in some regions, especially during periods of drought.

The program also aims to improve the output of distribution networks in cities and urban centers by 78% by 2027. The optimization of water infrastructure is expected to save nearly 207 million cubic meters of water. It would guarantee a continued supply of drinking water and an improvement in the quality of services.

Laftit added that the program is set to carry out liquid sanitation projects for the benefit of 128 cities and equip 1,207 rural centers with a sanitation network.

The first phase of the 2020-2027 program expects to mobilize 100 million cubic meters of water per year by 2027. The goal will be reached through the completion of 87 projects, including 22 for the irrigation of golf courses.

Amara, Laftit, and Akhannouch, along with Mohamed Benchaaboun, Minister of Economy, Finance, and Administrative Reform, Aziz Rabbah, Minister of Energy, Mining, and Environment, and Abderrahim El Hafidi, General Director of ONEE, have all signed the agreement. 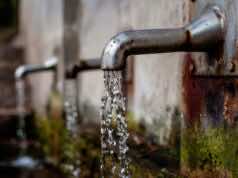