The Moroccan government supports a just and lasting solution to the conflict.

Rabat – Morocco’s government reiterated its firm support for  the Palestinian cause during the emergency meeting of the Arab League in Cairo, Egypt on February 1.

He said that Morocco supports a “just and lasting solution”  that will satisfy Palestinian demands.

“The resolution of the Palestinian issue is the key to stability in the Middle-East,” he said.

The official repeated the same statement from the Ministry of Foreign Affairs on the US-brokered Peace Plan known as the “deal of the century.”

Morocco “appreciates the constructive peace efforts of the U.S Administration with a view to achieving a lasting, just and equitable solution to this issue,” the Moroccan official affirmed.

Morocco maintains that the solution should guarantee the legitimate rights of Palestinians to achieve an independent and sovereign state with East Jerusalem as its capital.

The solution should also allow the people of the region to “live in dignity, prosperity, and stability,” Jazouli stressed.

Morocco’s government announced that it followed US President Trump’s presentation on the peace plan with “interest.”

Jazouli recalled that Morocco will examine the plan very carefully.

While acknowledging US efforts to resolve the conflict, Morocco insists that Jerusalem’s status be preserved.

“The final decision must be discussed between the parties in accordance with international legality,” he said.

Following Trump’s speech, Palestinian President Mahmoud Abbas said his country will throw the plan in the dustbin of history.

“Jerusalem is not for sale,” he declared firmly. 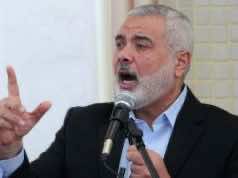 Hamas Leader Thanks King Mohammed VI for Supporting Palestinian Cause