Between bullying and lack of integration, the family of the little chef went through complex challenges during his first phase of childhood.

Rabat – This is the story of a 10-year old boy who escapes from the challenges of his daily life through cooking. In a small house in the Moroccan city of Marrakech, the little boy is changing his world with culinary magic.

Our story starts with Hamza, a little boy who lives with Autism. Isolated by his condition, our miniature superhero fought back and is challenging, not only his Autism, but society’s perceptions of his condition.

Children with Autism Spectrum Disorder (ASD) can struggle to communicate and effectively share their emotions, even with their closest family members.  Rights groups and families have long decried the lack of progress in providing support for children with the disorder, and their families, in Morocco.

Only last year Morocco introduced an autism-focused academic degree at the faculty of Medicine and Pharmacy (FMPC) in Casablanca.

The university is the first to focus on ASD in the country and the rest of the Maghreb region.

For people who are not aware of the disorder, the World Health Organization (WHO) described ASD as a “range of conditions characterized by some degree of impaired social behavior, communication and language, and a narrow range of interests and activities that are both unique to the individual and carried out repetitively.”

Our story’s hero, the Little Chef, was not diagnosed with ASD until he was three years old.

“He did not live a normal childhood. He was always at home, he was not integrated and depressed,” Hamza’s mother, Khadija, told Morocco World News.

Hamza’s mother said the medical assistance available was not enough.

“Medical interventions are really not enough and did not help that much. We spent a lot of money,” she told MWN.

Khadija said that she had to pay up to MAD 1,000 per week for therapy sessions with private doctors.

“They sat with him for 10 minutes and told us the therapy session is finished.”

Khadija said that going to public sector doctors was not an option as they often deal with up to 6 children in one session.

“This is impossible. There is a need to take care of fewer people during a therapy session for positive outcomes.”

Even with his therapy session with doctors and help from coaches, Hamza remained“a lonely child.”

Khadija, a 29-year-old mother, was desperate to find a solution for her child. Acknowledging that the journey is not easy, she said she had to see a doctor after she was depressed due to limited responses to evaluate the condition.

“He had no friends, so I tried to be a best friend because his condition was tough. He used to break things and sometimes hurt people, including his sister.”

Across Morocco, it is challenging for parents of children like Hamza to find a school that enrolls toddlers and children with Autism or special needs.

Hamza faced the same issues and moved from school to school, searching for a place that would accept and support him.

“I was moving him from one kindergarten to another for three years.”

Khadija thought that private schools might accept her child since she would be paying fees.

“I took him to four schools, who refused him after the enrollment test. They told me he is hyperactive. Honestly, they could have dealt with him, because Hamza is not a violent boy, he just needs attention and good care,” she said.

Khadija eventually found a school whose principal had a daughter with the same condition as Hamza.

“Unfortunately, I don’t know what happened and everything changed when the staff of the school changed. I knew that I should take him to another school because I know that the new people will not be as helpful as the former staff.”

“Of course, I have two other children. I have a little daughter who is 7 and a boy aged 3. When I was pregnant with my third child, Hamza was in a tough situation and faced a lot of troubles,” she said with a shaky voice.

The mother said she has to deal with everything related to her family as their father has to work.

“He supports me but of course it was not enough since he was always travelling,” she said.

Khadija said it is difficult for her children and Hamza’s classmates to find the right way to communicate with Hamza. Even teachers sometimes do not understand.

“A lot of children bullied my son and were insulting him because of his condition. He stopped liking going to the park at one point because of abuse from other children,” she said.

The mother said that she and her son could not escape the comments, even from “grown-ups.”

“I was told that I don’t take care of my child because some people thought it was a discipline question. People judge without knowing the condition that families go through in this case.”

Khadija said she was criticized by a teacher, who told her that she does not take good care of her child.

Cooking is magic for Hamza

When Khadija realized that her child’s condition was deteriorating, she thought of ways to integrate him into social activities that might help him overcome the challenges.

Khadija tried cooking as her first attempt. It was a resounding success.

“I took him to the kitchen and we made a pizza and when I told him to put the toppings, I was completely surprised because it made him so happy,” she said.

It was at that moment that Khadija understood that her child wanted to be praised and motivated to do new things.

After that, Khadija thought of a way to make her child happier and most of all “wanted.”

Cooking helped Hamza to learn colors, geometric forms with the different utensils in the kitchen.

“I thought that I should not stop. My child needed me and I had to come up with an innovative solution and this is what all mothers who experience the same issue should do,” she said.

“My brother and I, Abdelilah asked Hamza about what he thinks about the idea of sharing his videos while making food, and he liked the idea.”

Khadija’s brother, a young graphic designer, helped Hamza with the music and videos and created him a YouTube channel and pages on social media.

“You cannot imagine how my boy was when he saw the positive interactions on YouTube and Facebook,” she said.

Khadija said her son is now calmer than ever.

Khadija said that family has a great impact on children with ASD. She said that mothers should do their part and not only think of doctors and health institutions as if medical health is the solution.

“You should make your child feel that you are there for them. Help them learn and find ways to challenge the condition,” she said.

She stressed that she is proud of her son and she will always continue to support her little chef to grow confident r and to integrate “because it is possible if you believe in your child.” 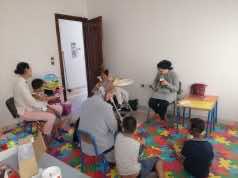 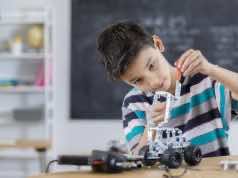 Autism: Morocco Takes One Step at a Time 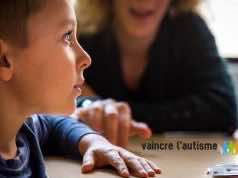