While the qualified teams have led an exemplary campaign thus far, it remains to be seen whether they can beat their final challenges and bring the African trophies to Morocco. 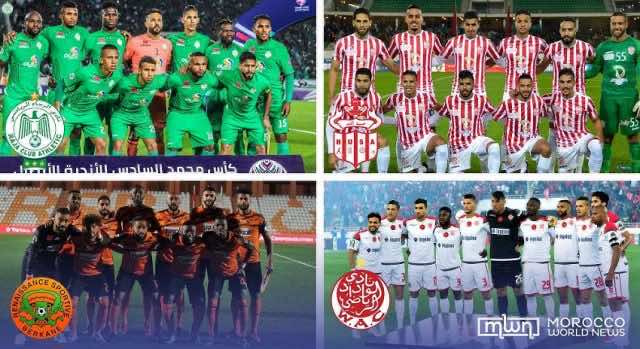 Rabat – In an unprecedented feat, four Moroccan teams have reached the semi-finals of the African club competitions.

In the CAF Champions League, the African top-tier club competition, the two poles of Casablanca, Raja CA and Wydad AC, earned their spot in the semi-finals on Saturday, March 7.

Meanwhile, in the CAF Confederation Cup, the second-tier tournament, RS Berkane and HUS Agadir qualified for the semis on Sunday, March 8.

Morocco is the most-represented country in the advanced stage of the competitions, with half the spots filled by Moroccan teams.

Egypt is also well-represented with three teams still competing for the titles: Al Ahly SC and Zamalek SC in the Champions League and Pyramids FC in the Confederation Cup.

Horoya AC from Guinea fills the remaining spot in the Confederation Cup, intruding the Moroccan-Egyptian duopoly over the competitions.

Raja, known as the Green Eagles, qualified for the semi-finals after eliminating some of the strongest teams in the continent.

In the group stage, Raja finished second behind the title-holder, ES Tunis, and ahead of the Algerian league runner-up, JS Kabylie, as well as the 2018 Confederation Cup runner up, the Democratic Republic of the Congo’s AS Vita Club.

In the quarter-finals, the Green Eagles faced another team from DRC, the Tout Puissant (TP) Mazembe.

As the name suggests, the “Almighty” Mazembe is the best team in their country, with a record of 17 local league titles, and one of the best in Africa, with five Champions League titles.

However, Mazembe’s impressive resume did not intimidate Raja players. The Casawi team won the first leg 2-0 in Casablanca, on February 28. For the second leg, Raja traveled to Lubumbashi to face a team determined to come back in the score.

The Green Eagles gave their all in Saturday’s game, enduring the heat and humidity—and the pressure of more than 18,000 fans who came to support Mazembe.

After 90 minutes that felt like an eternity for Raja fans, the Eagles earned their ticket to the semi-finals after conceding only one goal and ending the game 1-0.

Raja are set to face Egypt’s Zamalek in the semis, between May 1-8. The Egyptian team reached the semi-finals after eliminating the title-holder of the competition, ES Tunis.

Despite winning the 2018 Confederation Cup and the 2019 CAF Super Cup, Raja have not reached this stage of the Champions League since 2005. Their latest title in the competition, on the other hand, dates back to 1999, when they earned a third star on their crest.

Unlike their neighbors, Wydad, borrowing the Red Devils nickname from English giants Manchester United, have been a strong contender in the Champions League in recent years.

In 2017, the Red Devils won their second Champions League title.

After a less impressive performance in 2018, reaching only the quarter-finals, Wydad came back stronger in 2019, losing the title to ES Tunis after refusing to complete the final game due to the infamous Video Assistant Referee (VAR) scandal in Rades, near the Tunisian capital.

This year, the Casawi team is determined to win their third title and match the record of their Rajawi neighbor.

Wydad qualified for the quarter-finals after ranking second in their group, behind South Africa’s Mamelodi Sundowns and ahead of Angola’s Petro de Luanda and Algeria’s USM Alger.

In the quarter-finals, destiny brought the Moroccan club to the stadium where they lost last year’s title.

After securing a 2-0 win in the first leg in Casablanca, Wydad flew to Rades to face the ES Sahel for the second leg. Despite the determination of the Tunisian side to qualify, Wydad players stood their ground and were able to absorb the pressure, ending the game with a 1-0 small loss.

The Red Devils are now set to face Egypt’s Al Ahly, the record title-holder of the competition with 8 decorations. The Egyptian team is known as the African Club of the Century. The first leg of the semis is scheduled in Casablanca on May 1, while the second leg will take place in Cairo on May 8.

In the Confederation Cup, RS Berkane continue to show improvement year after year and hope that they can finally claim the African title.

In 2018, the Moroccan club reached the quarter-finals of the tournament in their first-ever participation in an international competition. Last year, Berkane led an unforgettable campaign, reaching the final game and losing the title in a penalty shootout to Cairo’s Zamalek.

This year, the club from Northeastern Morocco dominated the group stage, finishing first and outranking teams from Zambia, DRC, and Benin.

The Moroccan team put their first foot in the semi-finals after forcing their Egyptian opponents to draw 2-2 in the first leg in the city of Port Said. In the second leg, Berkane controlled the pace of the game after scoring a goal and kept a clean sheet, ending the game with a 1-0 win and earning a spot among the final four of the competition.

In the semis, Berkane are set to play against the second Moroccan team in the tournament, HUS Agadir, between May 3-10.

Despite not having a remarkable list of achievements, the Agadir team represents the hopes and dreams of over 2.5 million Moroccans from the Souss-Massa region.

Last year, the Soussi club reached the quarter-finals of the Confederation Cup for the first time in its history.

This year, the team has already broken their record and made an unprecedented achievement by reaching the semi-finals.

HUS Agadir have proven that their achievement is not only a strike of luck when they dominated their Libyan opponents of Al Nasr SC in the quarterfinals. The Moroccan club won the first leg 5-0 in Egypt, before confirming their qualification with a 2-0 win in Agadir.

While it is unfortunate that the Gadiris will have to face Berkane in the semi-finals, it also guarantees a Moroccan side in the final game. On paper, the Berkani side looks more experienced. However, the results of the games cannot be predicted as both teams are so close to a continental decoration.

The representation of Morocco by four teams in continental competitions shows the improvement of Moroccan football in recent years, especially at the level of clubs.

However, Egyptian football also has an exceptional reputation, and Moroccan clubs will have to prepare meticulously for their upcoming challenges.

While the competition will be fierce, it remains to be seen whether the Moroccan clubs will recreate the recent success of the Atlas Lions at the African FUTSAL Cup when they defeated Egypt in the finals and claimed the continental title.