The ministerial council was the first time King Mohammed VI has called for a meeting since the early days of the domestic COVID-19 outbreak in March. 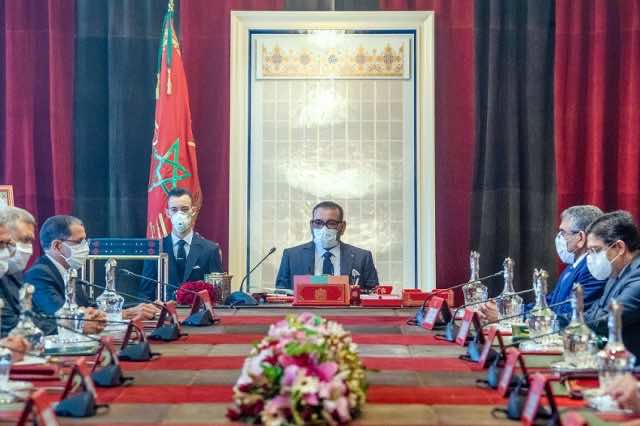 Rabat – King Mohammed VI has approved a series of draft laws and decrees, as well as international agreements that tackle the commercial, economic, judicial, technical, cultural, scientific, and military fields.

The King approved the legal texts during a ministerial council he summoned and chaired on Monday, July 6, at the Royal Palace of Rabat.

In his capacity as commander-in-chief of the Royal Armed Forces (FAR), King Mohammed VI approved three bills and one draft decree relating to the military field.

The second bill relates to defense and security materials and equipment, including weapons and ammunition. It aims to regulate the manufacturing, trade, import, export, and transportation of the security equipment, through establishing an authorization system that documents, tracks, and controls these operations.

The third draft legal text amends the law relating to Morocco’s military reserve force, integrating among the reserve officers executives of public establishments and companies who have received initial military training within one of FAR’s establishments.

Meanwhile, the draft decree relates to the reorganization of the Royal Air School in Marrakech. It aims to enable national air carrier Royal Air Maroc (RAM) to benefit from the expertise of FAR in terms of aeronautical training. The new legal text would establish a contractual framework between the Administration of National Defense and RAM, enabling the Royal Air School to train airline pilots.

Regarding Morocco’s international relations, King Mohammed VI approved 11 bilateral and multilateral agreements, including nine that are supported by legal frameworks. The agreements aim to consolidate Morocco’s role on the regional, continental, and international levels.

Meanwhile, multilateral agreements relate to the establishment of an African Medicines Agency, and to the automatic exchange of information relating to financial accounts.

Finally, in accordance with Article 49 of the Moroccan Constitution and based on recommendations from Head of Government Saad Eddine El Othmani and Minister of Foreign Affairs Nasser Bourita, King Mohammed VI appointed a new secretary general at the Ministry of Foreign Affairs and 19 new ambassadors.

Mounia Boucetta, who has worked as secretary of state at the Ministry of Foreign Affairs since 2017, is now secretary general at the ministry.

Meanwhile, the list of new ambassadors includes five appointments in Africa, four in the Arab world, four in Europe, three in Latin America, and three in Asia and Oceania.

The full list of newly-appointed ambassadors is as follows: