Morocco’s educational system is set to undergo a transition by strengthening the presence of the English language in school and university curricula.

Rabat – Morocco’s Minister of Education, Saaid Amzazi, met on Tuesday with US Ambassador to Morocco David Fischer to discuss ways of strengthening cooperation in the field of education between Morocco and the US.

The July 14 meeting took place at the headquarters of the Ministry of Education in Rabat, with the presence of several senior officials from the ministry and the American diplomatic mission to Morocco.

During the meeting, Amzazi and Fischer reviewed the progress on several US-Moroccan cooperation projects, notably the “Secondary Education Project” funded by the Moroccan branch of US agency Millenium Challenge Corporation, as well as two projects relating to the promotion of reading and teacher training for primary schools.

The two senior officials also talked about a new project with the objective of providing training for Moroccan English language teachers in order to implement the language in primary schools’ curricula in the near future.

The meeting comes as Moroccan universities are preparing to enter a new pedagogical era by distancing themselves from the Licence, Master, Doctorat (LMD) system, mainly used in Francophone countries, and adopting the educational models used in English-speaking countries.

In January 2020, Amzazi announced Moroccan higher education institutions will adopt a Bachelor system as of September 2020.

The minister made the announcement during the Moroccan-American Conference on Education held in Marrakech.

According to Amzazi, the new system will allow Morocco to open up more to international education systems, especially those in English-speaking countries that have demonstrated their efficiency.

The minister gave American universities as examples, stating that nearly 50 US higher education institutions are ranked among the top 100 universities in the world, according to the Times Higher Education.

Moroccan universities will adopt a transition period before completely implementing the Bachelor system. Students in their first academic year in 2020-2021 will be the only ones immediately affected by the change, while those who are in the second year or higher will continue their studies according to the current LMD system. 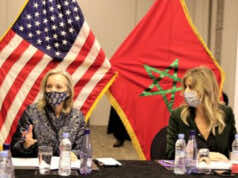 US Ambassador to Morocco Expresses Support for Racial Justice Movement