Rabat - King Mohammed VI’s participation in the One Planet summit today in France affirms that Morocco has a strong commitment to the preservation of the environment, previously showcased during the organization of COP22 in Marrakech. 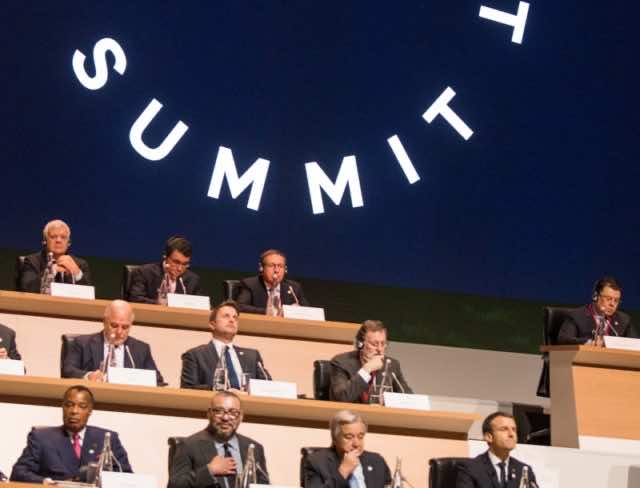 Rabat – King Mohammed VI’s participation in the One Planet summit today in France affirms that Morocco has a strong commitment to the preservation of the environment, previously showcased during the organization of COP22 in Marrakech.

Gathering more than 50 heads of state and government in La Seine Musicale, the main focus of the summit, which will revolve around “Climate Change Financing,” is to take further action on the financial front of the objectives of the Paris Agreement.

The participation of King Mohammed VI isn’t arbitrary. The sovereign is an awarded environmental protector. On May 9, the Energy Efficiency Visionary Award was given to King Mohammed VI, in recognition of his “outstanding” and “visionary” leadership.

Upon the reception of the award, the King sent a letter to the organizers, expressing Morocco’s “strong interest in energy efficiency as part of our vision of socio-economic development, given its role in strengthening the fundamental rights of citizens, protection of the environment, preservation of public health, reduction of energy dependence and rationalization of the State budget.”

Morocco has implemented an integrated national policy for the protection of the environment, combating the effects of climate change and anticipating the reduction of greenhouse gas emissions by up to 32 percent by 2030.

As part of this policy, Morocco has launched a series of initiatives aiming to integrate the green economy, notably through by adopting the National Environment Charter and Efficiency Strategy and liberalizing the renewable energy sector.

“Morocco, which hosted the COP22 in Marrakech on November 7-18, 2016, stands out for its exemplary approach to renewable energy under the visionary leadership of the King,” said Gil Quiniones, the co-chair of the Alliance to Save Energy (ASE) Board of Director.

“Morocco has been able to put in place a global strategy that has allowed a significant improvement in energy efficiency in the Kingdom, on the way to achieving the specified objectives In the Paris Climate Agreement.”

The King  has previously said that “the urgent challenge facing our world today is not so much the lack of energy resources but more of the necessary investment in this matter mobilization. Therefore, it is necessary to build the adequate energy infrastructure and to develop alternative technologies.”

“That is why the kingdom of Morocco,” he continued, “is constantly working to adapt to future changes in order to ensure its economic and social development and to meet its growing energy needs on a sustainable basis.”

The policies undertaken by the Kingdom place it at the forefront of climate change and environmental issues, Deputy Executive Secretary of the United Nations Framework Convention on Climate Change (UNFCCC) Richard Kinley previously said.

Meanwhile, the Executive Secretary of the United Nations Framework Convention on Climate Change (UNFCCC), Patricia Espinosa, praised during the preparation of COP23 in  Fiji the “great” Moroccan presidency of COP22, held in Marrakech in November 2016.

“The Moroccan presidency was great, and we had an incredible partner with whom we delivered the first session of the Conference,” said the official in a statement to the MAP on the sidelines of the Pre-COP23 meeting.

The One Earth Summit will be mainly devoted to the mobilization of funding to advance concrete projects in all areas of the fight against climate change: renewable energies, clean transport, agriculture, buildings and sustainable cities, and the protection of the population from the impacts of climate change.

The goal of the One Planet Summit is to bring together all key players in the world of finance and climate to build the tools, alliances, and initiatives essential to the greening of finance and accelerate the implementation of climate projects on field.