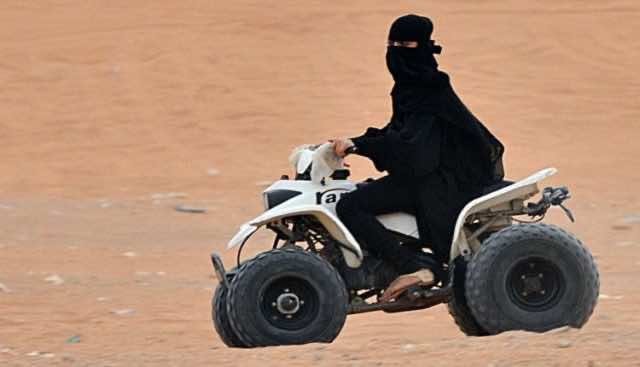 Rabat – As the winds of change continue to hit the Al-Saud kingdom, authorities have announced that Saudi women will also be able to drive motorcycles, vans, and trucks, after Riyadh lifted the ban on women’s driving three months ago.

The news was announced on state media and confirmed by the Saudi General Department of Traffic.

However, Saudi woman will still have to wait for seven months to hop on their motorcycles, as the measure will only come into effect beginning June 2018.

For many years, the ban on women driving has caused serious damage to the kingdom’s reputation at the regional and international level.

This measure had been demanded for many years by Saudi women, who took to the streets in their cars in protest of the policy, and some of whom were arrested and jailed for defying the ban.

The prohibition still had fierce support from Saudi officials and religious figures, who went as far as issuing religious edicts on the subject.

So is the case, for instance, for Sheikh Saad Al Hijri, who sparked the outrage of both the Saudi and international publics by stating that women cannot drive “because they have quarter of a brain.”

Allowing women to drive for the first time in the history of the Arabian kingdom is a move that comes as a part of a vast program of economic and social reforms initiated by the Crown Prince Mohammed Bin Salman in April 2016, under the Vision 2030 banner, to the discontent of ultra-conservative circles.

In Saudi Arabia, the unemployment rate is very high among women due to their total dependence on male drivers.

By allowing millions of new motorists to take the wheels, Riyadh’s decision could have a significant impact on the Saudi economy, aiming at reducing the country’s dependence on oil.

To boost the country’s economic growth, Saudi authorities will also allow public cinemas to operate within the kingdom as of early 2018, lifting a ban that has been in force for more than 35 years.

Despite lifting the gender-based road restrictions, Saudi Arabia continue to have one of the most discriminatory laws against women, who are still severely restricted and must live under the supervision of a male guardian in their families in order to study, travel. or even to receive hospital treatment.