The Moroccan climbed up a ladder and through an air conditioning duct to reach three children on the fourth floor of a burning building.

Rabat – A Moroccan resident in Spain has saved three children, two of his own and a neighbor’s toddler, from a burning building in northern Spain near Barcelona.

Spanish media reported that a 10-floor building caught fire, killing three and injuring 20. Thirteen of the victims are reported to have suffered “light injuries.”

The fire began shortly after 9 a.m. local time on Saturday. The building was on Marques de Mont-roig Avenue, in Badalona, a residential town north of Barcelona in Spain.

The Moroccan hero, Yassine Maati, climbed bravely to the fourth floor through an emergency exit and an air conditioning duct to reach his apartment and save his two children.

According to testimonies, Maati climbed a ladder on the outside of the building while another neighbor held it secure from above. After rescuing his two children, Maati helped them and his neighbor’s three-year-old son jump out of the window.

The three children are in critical condition after jumping out of the window to escape the flames.

Firemen placed mechanical ladders against the building to save many of the residents who immediately received initial treatment. 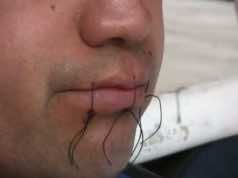