Rapprochement is unlikely as long as the military controls the levers of power in Algeria and continues to regard Morocco an existential threat to Algeria. 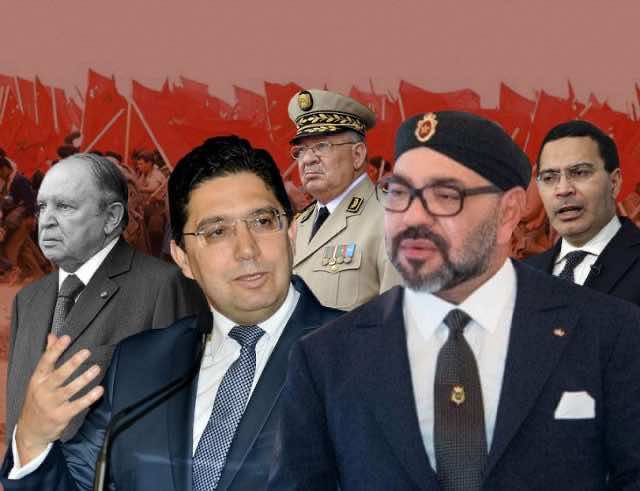 Washington, D.C. – Following over two months of massive peaceful protests, the Algerian people have managed to take an important step towards ending the political vacuum their country has experienced for more than six years because of the ailing health of President Abdelaziz Bouteflika.

Bouteflika’s resignation has led many to feel upbeat about Algeria’s political future and foreign policy to the point of speaking of a new era for the country.

For its neighbor Morocco, the dynamics of relations between the two regional powers in the Maghreb might be set for a change. While the Moroccan government has been conspicuously silent and steered away from interfering in Algeria’s domestic affairs, many Moroccans publicly lauded the peaceful way in which the Algerian people achieved Bouteflika’s departure.

Many Moroccan social media users have expressed hope that Bouteflika’s resignation will result in mended relations between Morocco and Algeria and a lasting political solution to the dispute over Western Sahara.

For observers eager to witness the end of the mistrust that has affected Moroccan-Algerian relations and resulted in the closure of their border for the most part of the past 50 years, Bouteflika’s departure may give a glimmer of hope. They hope the two countries will turn the page and work cooperatively to make the dream of a unified Maghreb a reality.

For others, including me, such an optimistic scenario is out of reach in the foreseeable future. The trend of confrontational interactions and a history of disagreement on key issues, especially the Saharan problem, might prevent such a rosy outcome.

Though Bouteflika was known for his hard anti-Morocco rhetoric, he was just a representative of a political elite that continue to see Morocco as an existential threat to Algeria. That political elite works in tandem with the army, which has played a central role in the country’s politics and foreign policy in the past five decades.

When analyzing Algeria’s politics, its future, or its relations with Morocco, one should not lose sight of the fact that the army rules the country, and it is the institution that decides who will ascend to power. Bouteflika’s fall, therefore, is merely a symbolic victory.

Army’ not ready to give up its power

The best evidence of the army’s unparalleled influence in Algerian politics is that President Bouteflika was forced to step down when the army’s Chief of Staff General Ahmed Gaid Salah brandished Article 102 of the Algerian Constitution. The article stipulates that the Constitutional Council should remove the president if he is suffering from a severe illness that prevents him from fully exercising his duties.

To apply the provision, the Algerian Parliament should, in principle, announce it at the request of the Constitutional Council, and the Parliament should vote on it by a two-thirds majority. Salah was the one to announce the possibility of using the article, which clearly highlights the pivotal role that the Algerian army plays in Algerian politics.

The way in which the Algerian president stepped down was not democratic. it is rather a peaceful military coup by the army chief of staff against his former boss. It is unlikely that the political movement we are seeing today will create the democratic transformation the people aspire to.

Gaid Salah’s decision to force Bouteflika to step down was not driven by his sympathy for the demonstrators or a belief that the time has come to put the country on the path to democracy. It was based on personal calculations and his desire to save the regime.

Just before President Bouteflika stepped down, Gaid Salah was among the long-time loyalists who supported his initial decision to run for a fifth term in office.

When he realized that the Algerian people were determined to end Bouteflika’s rule, Salah vociferously called for the application of Article 102 of the Constitution. Gaid Salah’s sudden change of heart aimed to make Algerian people think he understood their demands and aspirations, and make himself the hero who rid the country of Bouteflika and his cronies and preserved its stability.

Since Algeria’s independence in 1962, the army’s stranglehold over the country’s domestic and foreign policy has manifested itself in the fact that among its five presidents, three came from the army: Houari Boumediene, Chadli Bennjid, and Liamine Zeroual.

Although Bouteflika was a civilian, he was elected in 1999 and remained in power thanks to the support of the army. The army also intervened to prevent Islamists from taking power after the democratic elections in 1992.

As long as the army controls the levers of power in Algeria, and as long as the same military leaders and their cronies rule the country, it is impossible to predict a significant thaw in relations between Morocco and Algeria, let alone any progress in the political process in Western Sahara.

Since its creation more than 50 years ago, the Algerian army’s mainstay has been to weaken Morocco and to avenge the humiliation it suffered at the hands of the Moroccan army in the 1963 Sand War. The dispute over Western Sahara and Algeria’s support for Polisario for more than 42 years is simply a means to achieve that end.

When Algeria was under the leadership of the late President Mohamed Boudiaf, who was assassinated in 1992, the Algerian army did not approve of his closeness to Morocco and his willingness to open a new chapter in relations with Rabat.

Even if Algerian investigations concluded that Boudiaf’s assassination was an isolated incident, it is likely he paid the price for his intention to rebuild relations with Morocco, where he lived for more than 30 years before returning to Algeria.

Boudiaf’s son, Nacer, has challenged the Algerian government’s official version and implied that his father was killed by the same people who had asked him to lead Algeria at the time.

In an interview with Algerian news outlet Le Matin D’Algerie in June 2012, Nacer Boudiaf accused the army of being involved in the assassination of his father. He said his father had a falling out with high-ranking army officials who tried to convince him to cancel a long-planned trip to Morocco to attend his son’s engagement party.

A psychological barrier that is hard to overcome

Five decades of mistrust, mutual grievances, and lack of cooperation and dialogue have created a colossal psychological barrier between Morocco and Algeria that will be difficult to overcome. It would be wishful thinking to believe that the ousting of a president will pave the way to a reconciliation between the two countries.

That psychological barrier was made thicker and impenetrable by the fiery rhetoric that Bouteflika and his successive governments have used against Morocco for the past 20 years.

In the first speech he delivered upon his election as president in 1999, Bouteflika lashed out at Morocco and said the Algerian political and military elite had still not forgotten the humiliation, or as he put it the “hogra,” that Morocco inflicted on Algeria in 1963.

Even if one assumes that the Algerian army no longer controls the country, nothing can guarantee that the political elite and the bureaucracy that has been at the helm of the country in the past five decades will get rid of the anti-Moroccan sentiment that has permeated Algerian rhetoric towards Morocco.

The turn of events in Algeria since Bouteflika’s resignation suggests that Algeria’s political, military, and business elites have no intention to give up a system from which they have benefited for decades.

Bouteflika was forced to step down only to be replaced by Abdelkader Bensalah, his long-time loyalist. The Algerian regime may benefit from an external environment where regional players such as Saudi Arabia and the United Arab Emirates have seen any democratic momentum in Arab countries as an existential threat to their rule.

Unless a miracle happens and the Algerian oligarchy decides to give up its power and privileges for the sake of the country’s future, the Algerian people’s demands may be hijacked in the same way as they were hijacked in Egypt and Libya. Meanwhile, Algeria will pursue the same foreign policy towards Morocco.

In the past decade, Morocco has made multiple overtures to Algeria. The latest attempt was made during King Mohammed VI’s speech on the 43rd anniversary of the Green March last November, when he called on Algeria to open a meaningful dialogue without preconditions and in good faith. Morocco’s offer, however, fell on deaf ears.

To show more good faith, Morocco should perhaps go further and express regret for accusing the Algerian intelligence services of causing the Marrakech terrorist attack of 1994 and for immediately imposing visa restrictions on Algerians.

A former Algerian foreign minister argued that Morocco’s move despite Algeria’s denial of any involvement in the attack has deepened Algeria’s grievances and mistrust of Morocco.

Regardless of any Moroccan good faith move towards Algeria, an improvement in Rabat-Algiers relations can only come about when the Algerian elite: gives up its resentment of Morocco, stops using Western Sahara as a card to weaken their neighbor, and admits Morocco’s instrumental role in helping Algeria achieve independence.

Algerian leaders will have to realize that both countries share a common destiny and common threats and their people have the same aspirations for democracy, freedom of movement, prosperity, and stability. These goals can only be achieved if Morocco and Algeria work hand in hand to turn the unified Maghreb into a reality and a regional powerhouse to reckon with globally.

Thus far, nothing indicates that the Algerian elite is ready to open a new chapter in its relations with Morocco, let alone admit its responsibility in prolonging the Western Sahara conflict. So Bouteflika’s departure is, therefore, unlikely to result in any thaw in the relations between Morocco and Algeria or the resolution of the Western Sahara dispute.