While Tarawih have been performed in mosques for over 14 centuries, they can be just as valid when performed at home.

From West Africa to Southeast Asia, through the Maghreb and the Middle East, the COVID-19 pandemic continues to spread through the Muslim world. Since the start of Ramadan–the holiest Islamic month–on April 24-25, Muslims have found themselves struggling to adapt to the new reality created by the pandemic.

History will remember the 2020 Ramadan as the Ramadan without family gatherings and the Ramadan without prayers at mosques. However, giving up communal prayers to curb the COVID-19 spread does not mean Muslims are out of tools to express gratitude towards their creator.

Muslims have performed the Tarawih prayers, also spelled Taraweeh, in mosques during every Ramadan for over 14 centuries. This year, the COVID-19 pandemic is forcing them to perform Tarawih at home for the first time ever.

While the experience of performing Tarawih at home might be new to some, it was actually the most frequent during the life of Prophet Muhammad.

Tarawih, literally translated to “rest” or “relaxation” and also known as Qiyam al-Layl (night rising in Arabic) or Tahajjud (night prayer), is a prayer between the Isha prayer, the last prayer of the day, and the Fajr (dawn) prayer of the next day, performed during the nights of Ramadan.

While Tarawih are not mandatory, they are a Sunnah Mu’akkadah, a highly recommended practice by Prophet Muhammad. The companion Abu Hurairah narrated the prophet as saying: “Whoever prays Qiyam during Ramadan out of faith and in the hope of reward, he will be forgiven his previous sins.”

At first, Prophet Muhammad performed Tarawih with his companions at the mosque. However, he discontinued the practice out of concern it would be mandated and started performing it at home.

The second Muslim caliph, Umar ibn Al-Khattab, reinstated the praying of Tarawih in congregation after the death of Prophet Muhammad in the seventh century. The practice aimed to foster more community and unity among Muslims.

While Shia Muslims regard Tarawih as bid’ah, an intrusive practice in Islam, Sunni Muslims consider them a recommended practice. Umar ibn Al-Khattab qualified the praying of Tarawih in congregation as a positive innovation.

Since the reinstatement of Tarawih as a communal practice, Muslims across the world have gathered in mosques every night of Ramadan to perform the prayers.

Tarawih prayers are conducted in pairs of two rak’ahs, the unit of measuring Islamic prayers. Between every pair, worshippers rest for a few minutes. The name of Tarawih, translated to rest or relaxation, comes specifically from this special feature.

The total number of rak’ahs varies depending on the Islamic jurisprudence school and ranges from eight rak’ahs to 46. While there are different opinions on how many rak’ahs the prophet prayed, all Muslim scholars agree that the quality of Tarawih matters more than the quantity.

In Moroccan mosques, the prayer usually includes 16 rak’ahs, separated into eight rak’ahs after the Isha prayer and eight before Fajr.

During the Tarawih, Imams usually recite one juz’, one-thirtieth, of the Quran per night, while following the order of the holy book. The practice allows a complete recitation of the Quran by the end of Ramadan.

Praying Tarawih at home is not too different from performing them at the mosque. If the person praying does not learn the Quran by heart, they can recite any Surats, or chapters, they would like. If they would like to follow the common practice of achieving a complete recitation by the end of the month, they can carry a Quran and read from it while praying.

Several social media users suggested praying Tarawih behind an Imam on television as an alternative for people who have not learned the Quran by heart. As tempting as praying behind one’s favorite Quran reciter might be, Muslim scholars have all agreed that such a practice is not allowed.

One of the main criteria for the validity of prayers is the existence of communication between the Imam and the people following him through the prayers. This does not apply to broadcasted Tarawih prayers as the communication is one-sided.

The COVID-19 pandemic, as daunting as it might seem during Ramadan, could be an opportunity for Muslims around the world to learn more about their religion and, most importantly, reconnect with their god and their nuclear families. 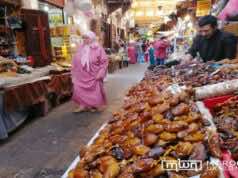