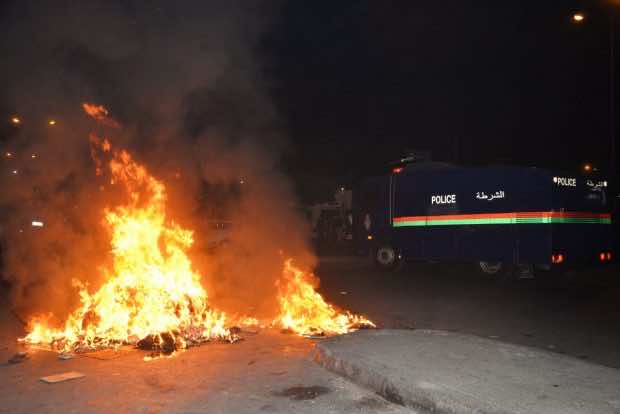 Rabat – Violent clashes between sub-Saharan immigrants and a group of Moroccans broke out on Friday night near the Ouled Ziane bus station in Casablanca, sparking virulent condemnation by Moroccans on the web.

The media has reported a number of eyewitness accounts of the clashes which occurred after a group of sub-Saharan immigrants allegedly harassed a young Moroccan woman in the street.

A group of Moroccan men living in the neighborhood quickly rushed to the scene of the incident and began altercation with a group of sub-Saharan immigrants who were illegally occupying a public garden near the Ouled Ziane bus station.

Several citizens were injured and public property was damaged by the attacks that caused a fire in the park the immigrants were using as a shelter. Civil protection forces intervened to quell the violence.

The incident has aroused strong and divided reactions among the public opinion. Some have expressed their outrage by accusing their fellow citizens of being engaged in racist behaviors toward the immigrants.

Others have claimed that it is not “racism” and have called for the sub-Saharans to be removed from the area. Still others have voiced their concern over the ineffectiveness of Morocco’s immigration policy, claiming that what happened at the makeshift camp was “predictable.”

“I live next door and there are sub-Saharans who have lived in the neighborhood for years without causing any problem, but many reported assaults and attacks occurred after this wave of migrants moved here. What happened yesterday was the straw that broke the camel’s back. It’s easy to talk when it’s not your sister or mother who is concerned and cannot even go to the grocery store after 8pm,” said a Moroccan resident in the neighborhood.

“I live right in front of this garden… When we give them food, they eat what they want and throw the rest in front of the houses. They also throw clothes and blankets; they harass girls all the time and above all they [urinate] on the walls; a resident has given up his house at a very low price just to escape the unbearable odors… They have taken our kindness as weakness… They have to leave as soon as possible before the situation gets worse… Let them go home!,” added another resident.

Salah Eddine Lemaizi, a Moroccan journalist said in a post published on his official account on Facebook, that what happened was “predictable.”  He listed a number of reasons that he believes prompted the incident, such as the deplorable and miserable conditions of the migrants, the regular brawls with local people who have filed numerous complaints for months, the total absence of efforts by the authorities to improve the living conditions of the local population as well as of the immigrants.

He also cited the supposed lack of local and national NGOs to assist and accompany the immigrants.

“It was unfortunate to see the arrests and traffic ban on all black people around the station, even though they were not ‘resident’ of the camp,” he said. “Under the pretext of protection from the risk of aggression, police cars still arrest immigrants walking near the station,” he said.

“This incident also shows the magnitude of the difference between the National Strategy of Immigration and Asylum (SNIA) and the local population and the degree of resentment of Moroccans vis-à-vis this immigration policy devised inside the walls of Rabat’s cabinets and offices,” he concluded.