Rabat - Moroccan Secretary of State for Transport Mohammed Najib Boulif has held talks with Congolese Minister of Transport, Civil Aviation and Merchant Navy Fidéle Dimou to reinforce ties between the two countries in the field of transport in Marrakech. 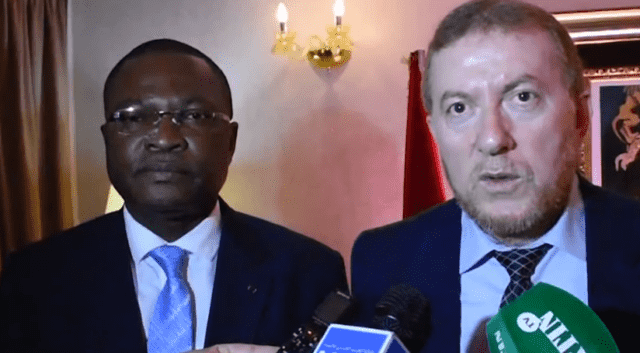 Rabat – Moroccan Secretary of State for Transport Mohammed Najib Boulif has held talks with Congolese Minister of Transport, Civil Aviation and Merchant Navy Fidéle Dimou to reinforce ties between the two countries in the field of transport in Marrakech.

Dimou told the press after the meeting that the Republic of Congo is “committed to strengthening” cooperation with Morocco in different areas, including maritime transport.

Dimou made his statement on the sidelines of the 24th Annual International Congress of Logistics, held May 9-11 in Marrakech under the theme “Broaden Horizons for Growth.”

Boulif said the two parties agreed to set up a joint commission to study potential projects and prepare agreements between the countries.

The International Congress of Logistics is organized under the patronage by King Mohammed VI, by the Moroccan Agency for Development of Logistics (AMDL) under the auspices of the Ministry of Equipment, Transport, Logistics and Water.

Morocco and the Republic of Congo previously signed 14 bilateral agreements in various fields, including fisheries, health and education.

The countries signed the contracts on the sidelines of the 1st Summit of the Climate Commission in Brazzaville April 29, attended by King Mohammed VI.

The agreements aim to reinforce cooperation between Rabat and Brazzaville and reinforce Morocco’s strategic vision towards African countries and friends according to Maghreb Arab Press (MAP).

At the summit, the King also delivered a speech on the challenges facing Africa, including the climate change impacts.