As the unofficial symbol of Morocco, couscous is a traditional dish that transcends barriers of class and ethnicity, uniting the country around a mouth-watering pile of grains and vegetables every Friday.

Rabat – Couscous is also a traditional meal in Algeria, Tunisia, Mauritania, and Libya, and North African Jews also brought the dish to Israel. Throughout Europe and North America, instant couscous, which is pre-steamed and dried, has found widespread popularity as a healthier alternative to rice and pasta.

While the origins of the dish are disputed, most sources point to the Imazighen, who are the indigenous people of North Africa. After Islam reached the Maghreb in the 7th century, eating couscous after Friday midday prayers gradually became an authentic Moroccan tradition. Couscous has been a staple in the North African diet for centuries, and remains so today.

The various “couscous wars” over the true genesis of the dish point to the importance of couscous in the national heritage of the Maghreb and beyond. Most notably, Morocco and Algeria tend to quarrel for recognition of ownership over the dish.

Read Also: The Diplomacy of Couscous in the Maghreb

Despite this dissent, couscous truly belongs to no one and everyone—its cultural significance cannot be confined to modern conceptions of borders and nations.

Just as the history of the Amaizgh people cannot be bound to a single bordered territory, the cultural legacies of North Africa’s natives trespass contemporary political and social spaces.

In Morocco, Friday couscous constitutes more than just a nice meal. In this communal society, the tradition is especially valuable as it provides regular opportunities for families to gather.

“The taste of couscous reminds me of my family,” says a 22-year-old man from Rabat. “Fridays aren’t complete without it.”

On Fridays in Morocco, children and teens have the afternoon off from school, and many businesses and offices close for a few hours to allow employees to enjoy the meal–some workers even get the whole day off. Not everyone stops working, of course, but the streets become rather empty as Muslims head to the mosque for prayers.

When prayers are over, the calm abruptly ends. The unlucky drivers that happen to be passing by a mosque after the final sala inevitably get stuck in a swarm of worshippers heading home or stopping to pick up dessert at the fruit carts that gather around mosques during prayer.

As soon as everyone arrives at home, the meal is served. Couscous can be rolled into balls and eaten by hand or with a spoon. Regardless of one’s personal method, proper couscous etiquette includes washing your hands thoroughly before eating and sticking to your own section.

After the meal, families snack on fruit, take naps, lounge, and chat at home for hours. Most will venture out to a cafe to meet with friends, run some errands, pray again, and then return home for tea time between five and seven. Others have to go back to work, but not until a few hours after eating.

Moroccan couscous has come to be associated with the country’s renowned hospitality. The meal has been enjoyed by tourists and travelers for decades, and even celebrities and public figures have declared their love for the traditional meal.

Spending a Friday in Morocco is the best way to experience first-hand the country’s mouth-watering cuisine, as well as the more casual side of the country’s variable atmosphere.

Apart from the post-prayer rush from the mosques, Fridays in Morocco are rather calm–that is, until the souks, streets, and other social spaces come alive after the sun goes down.

Although Friday is not an official day of the weekend in Morocco like it is in other Muslim countries, relaxation, for many, begins after enjoying a generous heap of couscous. 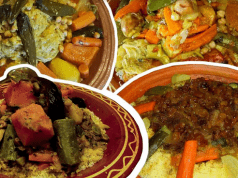 Friday Morning in a Moroccan Kitchen