While Morocco and South Africa diverge on some issues, such as the Western Sahara conflict, Africa’s fate is dependent on the two countries’ cooperation, Amrani said. 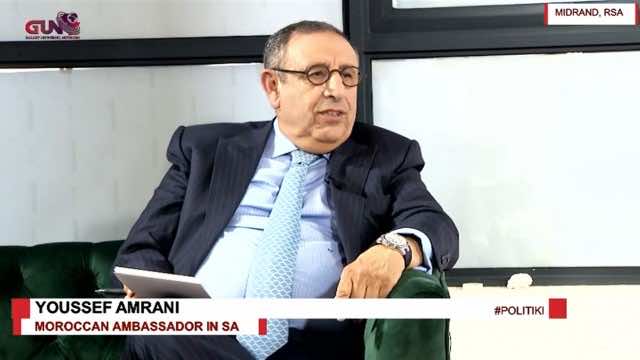 Rabat – Morocco and South Africa must work and act together to overcome Africa’s challenges, said the Moroccan Ambassador to South Africa, Youssef Amrani, on Sunday.

Amrani made the statement during his July 26 appearance on the “Politiki” program, aired on South African channel Galaxy TV.

During the program, Amrani expressed Morocco’s determination to build cooperation and solidarity relations with South Africa.

“The two countries must work together to build a prosperous, stable, and daring Africa,” he said.

The Moroccan diplomat highlighted the common points that can bring together the two countries. He recalled former South African President Nelson Mandela’s visit to Morocco in the early 1960s.

Morocco and South Africa shared the same legitimate ambitions for freedom and justice and revulsion against colonialism and apartheid, Amrani stressed.

Morocco has always stood by the side of African liberation movements. The country spared no political or diplomatic efforts to support African countries and their people, the diplomat continued.

“Solidarity and unity are the structuring vectors of a resolutely humanist Moroccan approach. It is unconditionally attached to the principles of justice, democracy, equity, and sharing,” Amrani said.

The Moroccan ambassador also recalled King Mohammed VI’s recent initiative to send medical aid to African countries. The aid benefited over 15 countries from all African subregions and aimed to support their fight against COVID-19.

“This is not only a commitment, but a heartfelt conviction that [African states] need to build their future together, far from division and selfishness,” Amrani stressed.

In the face of urgent global challenges, Africa needs unity, the diplomat added. He believes the continent has the means to fulfill its ambitions; it needs only political coherence at the level of the African Union, with strategic orientations that “echo the aspirations of African youth.”

Regarding the issues that Africa is facing, such as terrorism, migration, and climate change, Amrani called for coordinated strategies and common actions.

“We must strengthen African interconnections, dialogue, and regional integrations. In the face of common threats, we must be complementary, homogeneous, and interdependent in our actions,” he said.

According to the diplomat, integration, stability, and prosperity must be the main priorities for African countries.

Responding to a question about the Western Sahara conflict, Amrani stressed that Morocco is supporting the UN-led efforts. The UN Security Council’s approach can lead to a political, realistic, pragmatic, and lasting solution to the conflict, he said.

The solution must be based on compromise, the diplomat added, saying that Morocco’s Autonomy Plan is the “most serious and credible” plan to solve the issue.

“Morocco is committed to working in good faith with the UN and the international community to advance this process,” Amrani assured.