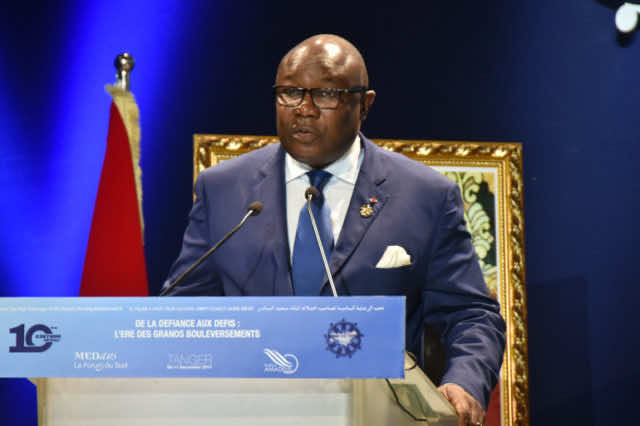 “Morocco‘s new vision for Africa is a bold and decisive move towards more balanced North-South partnership relations,” said Gabonese Vice President Pierre-Calver Maganga Moussavou on Wednesday at the opening ceremony of the 10th MEDays Forum held November 8 to 11 in Tangier.

“Since his accession to the throne, King Mohammed VI has made Africa a priority in the Kingdom’s diplomacy,” Moussavou noted.

“Morocco has a clear vision in terms of human development and transfer of expertise and skills, according to a win-win logic,” the Gabonese official said.

The event came a week after King Mohammed VI’s speech dedicated to the continent at the 10th World Policy Conference, which kicked off in Marrakech on Friday, November 3.

The monarch gave further proof that Africa has become central in Morocco’s foreign policy. King Mohammed VI has advocated for a bigger role for Africa on the world stage, expressing confidence that the continent will achieve progress, provided efforts are joined by its children.

“Given the recent developments and the clear progress made by Africa, it is of the utmost importance that our continent be front and center of a redesigned world stage,” said King Mohammed VI.

In its push towards South-South cooperation, Morocco managed to win the trust of many African partners that joint efforts and collaboration will enhance the continent’s social, economic and political development.

“Morocco’s new approach in its relations with the African continent has given a new meaning to a South-South cooperation,” said the Gabonese Vice President.

This cooperation “can promote co-development and move away from conventional practices that have marked North-South relations, without losing [Morocco’s] status as a privileged partner for Europe and the rest of the world,” Moussavou said.

In terms of bilateral cooperation, Maganga Moussavou said that the signed agreements between Morocco and Gabon “will enable his country to benefit from Morocco’s experience in several areas, including housing and income-generating activities.”

The African Union (AU) has managed to “silence the guns” over the past three years, Alpha Condé, AU Chairperson and president of the Republic of Guinea, said Wednesday in Tangier.

Nevertheless, though conflicts have decreased, various challenges are pushing Africa away from achieving its objective of silencing the guns by the year 2020, he pointed out at the opening ceremony of the 10th MEDays Forum.

Greater attention is paid now by the international community to the AU’s conflict resolution mechanisms, as evidenced by the G5 Sahel Force, an African initiative hailed by the major powers, including the United States, which has finally agreed to participate in its financing, the AU chairperson noted.

Africa has “the potential to take control of its destiny and achieve its development,” he stressed, noting that Morocco can play an important role in the transformation of the African economy.

In this regard, the AU chairperson commended Morocco’s return to the Pan-African organization.

The Gabonese Vice President said that the MEDays forum has become one of the most important geopolitical and economic events organized in Morocco by a non-governmental structure and has gradually emerged as a geostrategic meeting in Africa and in the Arab world.

Placed under the patronage of King Mohammed VI, the 10th edition of MEDays will discuss the new economic power of Africa, sustainable development, and current geopolitical issues under the theme “From defiance to challenges: the era of major upheavals.”

This year’s forum is expected to host more than 3,000 participants and 150 high-level speakers, including several former heads of state and government, ministers, political decision-makers, business leaders, academics, and representatives of civil society and the media.