Rabat - US President Donald Trump’s recognition of Jerusalem as the capital of Israel on Wednesday has triggered fury around the world. Anti-US protests erupted almost immediately across the Arab world, condemning the White House policy, with extended demonstrations planned. 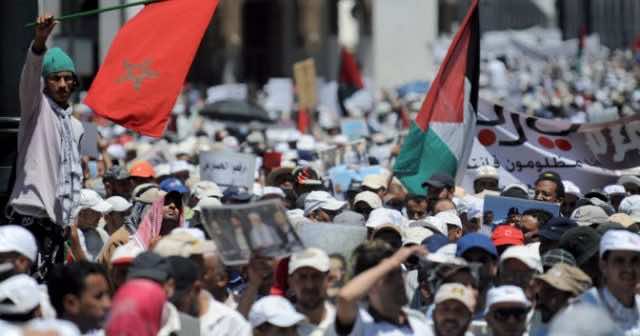 Rabat – US President Donald Trump’s recognition of Jerusalem as the capital of Israel on Wednesday has triggered fury around the world. Anti-US protests erupted almost immediately across the Arab world, condemning the White House policy, with extended demonstrations planned.

Former US presidents Bill Clinton, George Bush and Barack Obama all paid lip service to declaring Jerusalem as the capital of Israel, but Trump has broke the tradition and delivered his campaign promise.

From Jordan to Turkey, Trump’s dramatic declaration was received with massive protests. In the West Bank, schools and shops closed, as more than 250,000 Palestinians declared “days of rage” and took to the streets, shouting anti-Trump slogans and setting pictures of the former reality television star on fire.

The Palestinian Islamist movement Hamas called on Thursday for a new uprising against Israel. “We should call for and we should work on launching an intifada in the face of the Zionist enemy,” Hamas leader Ismail Haniyeh said in a speech in Gaza.

The group, which helped lead the 2000-2005 intifada, called for “December 8 to be the first day of the intifada against the occupier,” referring to Israel.

In the wake of Trump’s decision, Moroccan civil society will hold a protest next Sunday in Rabat. Themed “For Al Quds, with resistance, against all forms of normalization … The march of the Moroccan people,” the march is expected to bring thousands of people in protest.

Meanwhile, a sit-in is expected this Thursday in front of Parliament in Rabat. The capital city was home to massive demonstrations from 2002 and 2014 against the “Zionist aggression of Gaza.”

In Jordan’s capital Amman, hundreds of Palestinian refugees flocked to the streets denouncing Trump’s move and calling on the Jordanian government to end its 1994 peace treaty with Israel. “Down with America… America is the mother of terror,” they shouted.

King Abdullah has told Trump that the decision would derail the Palestinian-Israeli peace process.

In Turkey, where thousands of protesters rallied across the nation, President Recep Tayyip Erdogan accused Trump of hurling the Middle East into a “ring of fire.”

Several hundred activists gathered outside the US Consulate in Istanbul chanting anti-Trump slogans as they threw objects at the American diplomatic mission. Protesters also gathered around US Embassy in Ankara. Similar demonstrations took place in numerous cities and provinces, according to the news agency Anadolu.

“It’s not possible to understand what you are trying to get out of it. Political leaders exist not to stir things up, but to make peace,” Erdogan said.

Many of the US top allies have spoken out against Trump’s decision. “We disagree with the US decision,” British Prime Minister Theresa May said on Wednesday. “We believe it is unhelpful in terms of prospects for peace in the region.”

French President Emmanuel Macron condemned the move as a “regrettable decision of which France does not approve.”

United Nations Secretary-General António Guterres said that he would do everything in his power “to support the Israeli and Palestinian leaders to return to meaningful negotiations and to realize this vision of a lasting peace for both people.”

The Saudi Royal Court issued a statement saying that the kingdom followed “with deep sorrow” Trump’s decision and warned of “dangerous consequences of moving the US Embassy to Jerusalem,” urging the White House to reverse its decision and adhere to international law.

“The federal government does not support this position because the status of Jerusalem as part of a two-state solution to be negotiated,” she tweeted.