Rabat - The annual Gnaoua festival in  Essaouira is not the only occasion that gathers visitors. Morocco’s coastal city has in fact attracted large numbers of visitors during the New Year’s holiday. 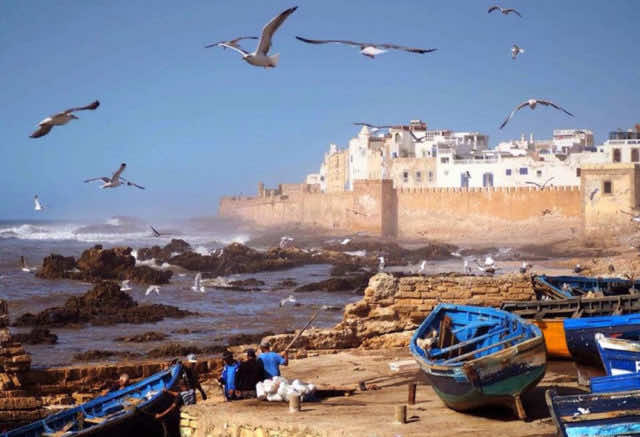 Rabat – The annual Gnaoua festival in  Essaouira is not the only occasion that gathers visitors. Morocco’s coastal city has in fact attracted large numbers of visitors during the New Year’s holiday.

Essaouira, commonly known as Mogador, welcomed this weekend significant flows of domestic and foreign tourists, who chosen the coastal atmosphere to celebrate the New Year eve with their family, friends or loved ones.

This new year’s eve, the city’s hotels and tourist accommodations were fully booked, according to  Maghreb Arab Press (MAP).

“All hotels in Essaouira, in all their categories are full,” Redwane Khanne, President of the Provincial Council of Tourism (CPT) told MAP.

He added that the flow of tourists in the city shows the CPT’s efforts to attract visitors to the city are successful, saying that the the city has taken a set of measures to prepare for the New Year festivities and holiday.

These actions were undertaken by local authorities, elected officials and tourist exprers in order to allow the city’s visitors to enjoy their stay.

Security measures have been also included both by local authorities and by receptionists in order to increase security inside the facilities and around the city.

“The city of Essaouira is well known for its calmness, security and simplicity and friendliness of its natives,” said CPT’s president.

Speaking about Essaouira’s tourist markets,  Khanne said that the city receives tourists from the four corners of the world, including Spanish and German tourists.

He also pointed out that visitors from promising issuing markets, particularly the Asian market are also establishing themselves as regular visitors to the coastal city, including tourists from China, South Korea and Japan. a.

CPT is also studying the possibility with Morocco’s National Tourist Office (ONMT) to set up a digital communication strategy, intended to ensure “a good visibility of the city on the national and international tourism markets,” said Khanne. This strategy is aimed at offering potential tourists with an opportunity to discover Morocco in all its diversity and cultural wealth.

Essaouira has been the home of Jewish heritage and is therefore a place, where Jewish of the world meet annually to celebrate the Hiloula of Rabbi Haim Pinto.

In 2001, Medina of Essaouira was added to the World Heritage list of UNESCO. The city also hosts one of the most important festivals, which attract both local and international visitors every year.

Every year, the beautiful coastal city devotes its maze of streets and lovely beaches to music for the Gnaoua and World Music Festival. 2017 marked the 20th birthday of the event, bringing together a mixture of Moroccan, African and international artists to celebrate the music of Gnaoua.