Layeena and Fatima Louna started playing music together 13 years ago when they met at university, and later found themselves touring China, sharing Moroccan tribal rhythms. 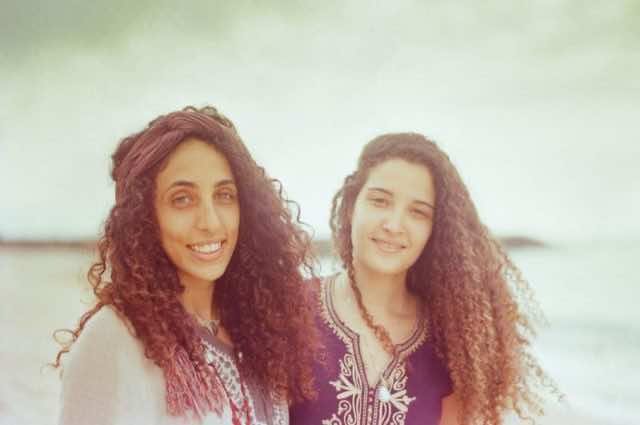 Rabat – I first met Moroccan musicians Lina Benali (Layeena) and Fatima Zahra Farihi (Fatima Louna) at a gig they performed in Kunming, China in 2016. I remember the night clearly, as I did not intend to end up at their concert. I went out to celebrate a colleague’s birthday and found myself mesmerized by their Moroccan-inspired beats and harmony. Five years later, I reconnected with the singers in Rabat and they told me about their musical journey from Agadir to Asia, and back to Morocco.

Layeena and Fatima Louna began sharing their passion for music when they met 13 years ago in their hometown of Agadir, Morocco.

“It all started during our first year of university at Universiapolis in Agadir in 2009. We met at a school music club and started meeting a lot of musicians and artists from the university. There were just four of us girls and a lot of guys. Layeena, me, Sarah Mou, and Gita Kettani started a band and called ourselves Thundersouls,” said Layeena.

After spending three years playing gigs at the university, the girl band entered a nationwide competition called Generation Mawazine, where they made it to the quarter-finals. The group performed their first original song titled “Tawarguit,” meaning dreams in the Tamazight (Berber) language. Of the 400 bands performing in the competition, they were the only women to take the stage.

Although they did not win the competition, it was not long before the big dreams that the young musicians shared came true.

From Agadir to Wuhan, Thundersouls shared Moroccan music across China while completing their master’s degrees.

In 2012, Fatima Louna moved to Wuhan, China to study Mandarin and pursue a master’s degree in international trade. At the age of 21, she hoped that learning Mandarin and acquainting herself with the Chinese economy would boost her future job prospects.

Layeena and Sara Mou followed suit, enrolling in academic programs at Wuhan University of Technology, and joined their musical partner in China in 2013.

“I have always been very attracted to Chinese culture. As a young girl I would dress up in traditional Chinese outfits and decorate my room with pictures of Mulan.” Although she was excited about the move, Layeena added that the decision was, in many ways, a leap of faith. “I was like, what the hell am I doing?”

“We went to China to do our masters degrees but actually our lives there took another turn and our main focus became music. That’s when I personally lost interest in having a career in international trade,” recalled Fatima Louna.

The three singers traveled together and performed throughout China. Each gig led to another and they found themselves performing anywhere from rural farms in Yunnan province to China’s major metropolises such as Beijing or Shanghai.

“We were invited to play music everywhere. We were given a taste of China through playing music and it was really special,” said Layeena.

In China, people were curious about their music. Moroccan tribal rhythms and popular percussion are distinctive from China’s favored string instruments and typically high-pitched vocals. Many styles of Chinese music are performed as meditation and public performances provoke a culturally appropriate response.

“In small villages, we had different reactions. In some places, people don’t always have a culture of cheering or clapping, so it was a bit awkward for us at first. People were recording with their phones and just watching with curiosity. It took us a while to get used to,” explained Fatima Louna.

At other times, the band was taken aback by the ways locals connected with their music. Their upbeat songs inspired crowds to dance and even participate. “I remember in this concert in Wuhan, we were playing and everyone was singing the verse with us in Tamazight. It was amazing.”

Thundersouls often invited other artists to join in their performances and jam sessions, sometimes inspiring a fusion of Chinese and Moroccan instruments.

After four years of living in the city of Wuhan, the trio split and Sarah moved on to Shanghai, while Layeena and Fatima Louna pursued their passions throughout Yunnan province as a duo. Their last performance as a band was at the Shanghai Ladyfest in 2017, an international concert and celebration of women’s empowerment.

Yunnan, in China’s southwest, is well-known for its ethnic diversity and picturesque natural landscapes. Layeena and Fatima Louna fell in love with the province, which they described as “beautiful with music found everywhere.”

Living in China opened many doors for Layeena and Fatima Louna’s musical careers, but also inspired new ideas and values.

“To be honest, a lot of the opportunities we had there, I don’t think we would have had here in Morocco. I believe Morocco still needs a lot of work done in the artistic field — more festivals, more spaces for people to meet and learn about music and learn about art.”

Beyond China, the two Moroccans performed together in India, the Philippines, and Indonesia. Throughout Asia they identified nature as a source of inspiration and guidance towards the processes of their artistic and personal development.

At the start of their musical careers in Agadir, Thundersouls’ original songs were mainly about love and heartbreaks. Layeena and Fatima Louna laughed as they recalled their youthful musical craftings.

Now, the duo hopes to share messages of empowerment, and to encourage their listeners to connect with themselves and nature. They describe their current music as “high vibe” and inspired by Moroccan artist Hindi Zahra.

“I would walk in the jungle in Indonesia and start singing out loud. This feeling of being totally free helped me and inspired me to write this kind of music. I truly believe if we all feel free somewhere and connected with our true nature, we can live in harmony,” Layeena said, sitting beside her Chinese tea set.

Their paths diverged, but they continued meeting at least once a year to squeeze in a performance.

In 2016, Layeena moved to Bali where she began conducting singing circles and focusing her energy on personal health and the outdoors. Fatima Louna made her way back to Morocco in an attempt to put her master’s degree to professional use. Although her new job eventually led her back to China a year later, the work only confirmed her commitment to the arts.

Both singers have since returned to Morocco, reminiscing fondly on their shared memories in the Middle Kingdom. Although both say that China holds a special place in their hearts and they will return for visits often, the two agree that China is no longer the place they once knew. China’s changing technological landscape has inspired a shift towards overarching government-controlled censorship and surveillance measures and a lack of privacy, taking away the artists’ desired freedoms, the two said.

Layeena is working as a vocal coach while heading up musical events and retreats. She is working on her individual album and toward mastering a greater understanding of what it means to live in the moment.

Fatima Louna has since endeavored to start a new project with her husband. Their business, called Shenti Life (“shenti” meaning health and body in Mandarin), is a platform to share cultural, spiritual, and musical videos, and includes a shop selling ecologically friendly products.

While both temporarily settled back in Rabat, the two friends and songwriters are planning their next musical collaborations and hope to do some recordings.

Amid the COVID-19 pandemic, Fatima Louna said, “We are talking about how to rethink our tomorrow. That’s what my new song is about. Trying to find the right words with which people will resonate and see that something is wrong with our world – we need change right now. This is the vibe I am in this month. I am trying to focus my energy in writing songs about this.”