Washington - With today’s nomination of businessman David Fischer as the United States’ new ambassador to Morocco, many are wondering: why it took President Donald Trump so long? 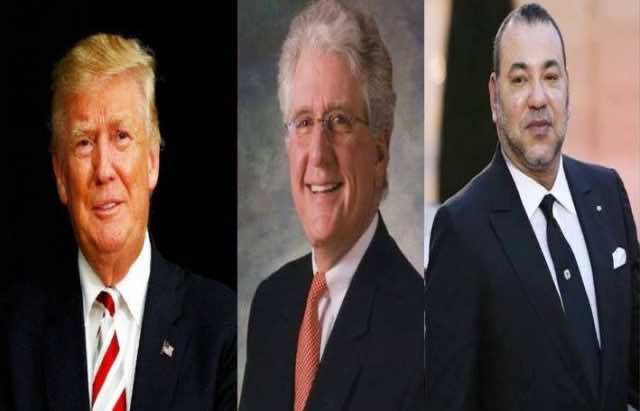 Washington – With today’s nomination of businessman David Fischer as the United States’ new ambassador to Morocco, many are wondering: why it took President Donald Trump so long?

While the Trump administration appointed an ambassador to Algeria back in July, it waited almost a year to nominate one for Morocco. Thus, worried observers have begun to ask whether Morocco-US relations are undergoing a kind of silent diplomatic distancing, and whether the new US administration is giving priority to Algeria at the expense of Morocco.

If we read these appointments hastily, without taking into account the American tradition of appointing new ambassadors, we may conclude that the new US administration intends to give Algeria priority over Morocco. Others might argue that the President Trump intends to retaliate against Morocco after it allegedly donated nearly USD 12 million to the Clinton Foundation.

What may reinforce this hypothesis is the personality of the American president, who displays a tendency to retaliate against all those who stood in his way to prominence. Many believe that this was the cause of the delay in the appointment of Fischer, especially in the light of the unprecedented campaign that Saudi Crown Prince Mohammed bin Salman launched against several Saudi princes and ministers, including Prince Alwaleed bin Talal.

After the arrest of the billionaire prince, some observers commented that the US president was behind it, as a result of their arguments on Twitter during the presidential campaign last year.

However, these conclusions are not based on objective analysis of American political life and the complexities that surround the appointment of US officials to senior positions, including ambassadors.

The first factor to be considered in the decision-making process in US foreign policy is that the White House is not the only institution that determines US foreign policy. The decision-making process is made by the State Department and the Department of Defense. Accordingly, despite the loose rhetoric that any presidential candidate may use during the campaign against a country, when he takes office, he follows the same general policy orientations. Even if he changes those policies, the changes are done in a way that does not seriously affect the US’ relations with its allies and partners.

If the president attempts to introduce a fundamental change in American foreign policy toward a country, his approach might be opposed by the State Department and the Department of Defense. The best proof of this is the current Gulf crisis. While President Trump fully supported Saudi Arabia, the United Arab Emirates, Egypt, and Bahrain against Qatar and accused it of supporting terrorism, the State Department and the Pentagon remained neutral and called for a political solution. Moreover, US Secretary of State Rex Tillerson blamed the four countries and accused them of being unwilling to sit on the negotiating table with Qatar.

The position expressed by the State Department prompted the US president to reconsider his support for the Saudi-led coalition. Consequently, Trump changed his aggressive tone against Qatar and called on all parties to negotiate a political solution. Thus, despite President Trump’s attempt to change the US foreign policy toward Qatar, the diplomatic elite, which is keen to protect American interests abroad, has shown no willingness to sacrifice US-Qatar ties.

Therefore, the main reason behind the delay in appointing Fischer as the new US ambassador to Morocco is neither President Trump’s intention to punish Morocco and give priority to Algeria, nor a deterioration in Moroccan-American relations. This delay lies in the tradition that defines the process of appointing ambassadors by the American president.

In this regard, we should bear in mind that the countries to which the US President appoints his friends or donors are countries regarded as strategic states for Washington and those that enjoy political and economic stability. Among these countries are all European Union members, Canada, Australia, Japan, New Zealand, South Korea, Israel, South Africa, and other countries from Asia and Africa, including Morocco and Saudi Arabia, in addition to international organizations such as the United Nations.

While the process of appointing ambassadors from the diplomatic corps is smooth and is not subject to complications by the Congress, the process of appointing ambassadors from the “political appointees” category is characterized by multiple complexities, chief of which is a meticulous screening process. Moreover, what makes the process of appointing political ambassadors more complex is the divergence of views between senior White House officials and the State Department. According to an article published in Politico last June, one of the main factors contributing to delaying the selection of “political” ambassadors is the internal conflicts in the US administration between senior White House and State Department officials, as well as the president’s own willingness to personally approve each candidate.

Another factor that did not help the US president to propose new “political appointees” is his narrow circle of donors and friends willing to work abroad. Since the vast majority of those close to him have joined his administration, there are few options for appointing new ambassadors in countries where the US administration has always appointed “political appointees,” like Morocco.

What helps us better understand why there was such a delay in appointing an ambassador to Rabat is that all American ambassadors to Morocco since 1979 have fallen into the category of “political appointees.” By contrast, all the American ambassadors who have been appointed to Algeria since 1974 have belonged to the diplomatic corps, except for the period of former President Jimmy Carter (1977-1981).

Therefore, the appointment of the new US Ambassador to Algeria does not mean that America seeks to strengthen its relations with Algeria at the expense of Morocco or that relations between Rabat and Washington are going through a silent crisis, but rather is a result of the smoothness of appointing ambassadors from the diplomatic corps. What reinforces this hypothesis is that the US president has not yet appointed new ambassadors in other countries reserved usually for “political appointees,” such as Saudi Arabia, South Korea, South Africa, Sweden, Austria, Australia, Belgium, Egypt, Jordan, Qatar, and many international organizations.

The delay in appointing American ambassadors to these countries does not mean that their relations with the United States are strained, but rather reinforces the complexity of the process of appointing ambassadors from the “political appointees” category. Had this criterion been a benchmark for measuring the strength of US relations with its traditional allies, President Trump would not have chosen Saudi Arabia as his first foreign destination since he took office, nor would he have visited South Korea and expressed Washington’s determination to protect the country from the threat posed by North Korea’s nuclear program.

Morocco-US Relations: Strong as Ever

The best proof that relations between Rabat and Washington have not deteriorated is the signing of President Trump last May of the Appropriation Bill, which allocated a percentage of American financial aid to the Western Sahara, in southern Morocco.

Whatever the view of President Donald Trump about Morocco, Moroccan-American relations have reached a stage of maturity and development that keeps them away from the political fluctuations of the successive US administrations. Although there are some differences in the way Republican and Democratic administrations deal with Morocco, the US “establishment”  (especially the State Department, the Department of Defense and the Congress) is aware of the value of Morocco, the depth of the historical relations between the two countries, the pivotal role Morocco plays in maintaining the stability in North African and Sahel region, and its crucial role in the war against terrorism.