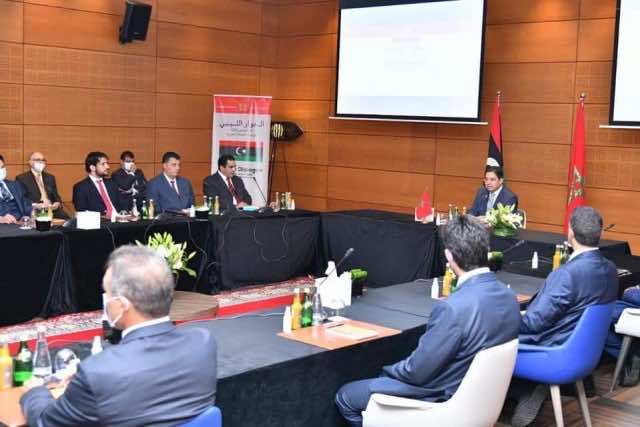 The Morocco-assisted dialogue to solve the Libyan crisis is set to resume on Sunday, September 27, according to Anadolu Agency. Citing a member of the Libyan High Council of State, the report said the meeting aims to select a new presidential council.

Members of the dialogue committee, representing the Tripoli-based Libyan High Council of State and the Tobruk-based House of Representatives, are set to fly to Morocco today, September 25.

“The members of the dialogue committee will discuss, during the negotiations, mechanisms for choosing who will assume leading positions,” wrote Anadolu Agency.

The positions concern a new presidential council. The council consists of a president, two deputies, and a separate head of government.

“It is very likely that a new presidential council will be chosen in the coming days,” they said.

The recent meeting in Morocco was one of the most important steps towards solving the six-year-old Libyan crisis. The dialogue resulted in “important understandings” between the Libyan High Council of State and the House of Representatives.

The two parties left Morocco feeling hopeful for a resolution to the Libyan crisis in the near future.

During the four-day negotiations, the Libyan delegations were able to “set clear rules for eliminating corruption, reducing the waste of public money, and ending the state of institutional division.”

The upcoming meeting in Morocco would testify to the Kingdom’s “constructive neutrality,” mainly its determination to help solve the Libyan conflict through an impartial political process.

For several years, Morocco has reiterated the three main points of its position on the Libyan crisis.

First, Morocco believes the solution to the Libyan crisis must come from Libyans themselves through negotiation, away from any foreign intervention.

The second point is that the solution must be peaceful rather than military.

Third, Morocco believes the solution to the Libyan crisis must be primarily political to ensure the legitimacy of any government that would come after elections.

Morocco’s efforts to solve the Libyan crisis, notably the recent Bouznika talks, earned the country unanimous praise in the international community. A number of international bodies, including the UN, the European Union, the African Union, and the Arab League, have applauded Morocco’s mediation efforts.

Meanwhile, Turkey, Egypt, Jordan, Qatar, Italy, Spain, France, and the US have  also expressed their support to Morocco and what appears to be a new momentum in the Libyan crisis.

While it is yet unclear whether the upcoming meeting in Morocco will result in a formal agreement between the Libyan delegations, there are promising signs that the Libyan crisis is closer than ever to reaching a solution.